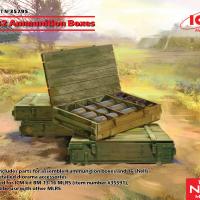 The RS-132 is an unguided Russian rocket which officially entered service in 1938. It was not known for its accuracy and in one test had no hits in 134 firings. During WWII, its performance was poor since it was usually fired from great distances. It required a direct hit to disable light and medium German armor. Near misses caused no damage at all. It was mostly effective when fired in salvos against large groups of ground troops.

The parts are crisply details and flash free. A double-sided instruction guide is provided. The seven assembly steps are very well illustrated.  The color callouts correspond to three colors (olive green, flat black and steel) for which the Tamiya and Revell codes are provided.

To begin, I removed all the pieces and cleaned them up as need. I assembled the boxes first. The fact that they are identical means that  this construction goes very fast.  Next, I sprayed them with Vallejo gray primer and let them dry.

Once the boxes were built, I moved on to the rockets. A nice aspect to the rockets is that they are a solid mold with no seam running from tip to end. The only assembly required is inserting fins.  Since the body of the rockets are to be painted steel, I lightly primed them again with a bit of black, and I continued the black primer on the interior of the ammunition boxes.

I completed the boxes by using Flory wash and a few light applications of AK Interactive weathering pencils.

This is a very quick kit to build. It is a well-engineered kit and requires little effort—apart from painting---to complete.  I can see this being a great little detail addition to a WWII Russian diorama.

Thank you to Bill and Phil and to ICM for providing this kit to the IPMS USA reviewer corp.

Single piece rocket bodies are an improvement over the original 2-piece moldings in the BM-13-16N Katyusha kit(ICM 35512), but RS-132s came packed in crates of 2.  (see Osprey New Vanguard 235, p.10).   For accuracy's sake, the crates will have to be split into halves or scratchbuilt.