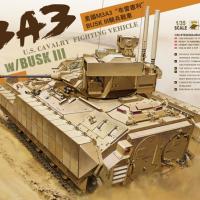 In 1980 the US Army formally took delivery of the new M2 Bradley IFV (Infantry Fighting Vehicle) and M3 Bradley CFV (Cavalry Fighting Vehicle). The M3 CFV had a wielded aluminum hull. It was powered by a 500hp Cummins VTA-903 diesel engine with an HMDT-500 automatic transmission at that time. Its two-man turret had positions for the commander and gunner. The turret consisted of a 25mm M242 Bushmaster chain gun, a 7.62mm M240C coaxial machine gun and a two-tube TOW anti-tank missile launcher. Firing ports and periscopes on each side of the hull, and the two firing ports on the rear ramp were eliminated on the M3 CFV.

The primary rule of the M3 CFV is reconnaissance and scouting. M3 CFV is normally assigned to Tank battalions. The M3 CFV first saw combat in the 1991 Persian Gulf war, Operation Desert Storm. The M3 played a major part in one of the last great tank battles of the twentieth century at the battle of 73 Easting just west of Kuwait. After the Gulf War the M3 CFV received many upgrades including the Commander’s Independent thermal Viewer (CITV) on the turret, Driver’s Vision Enhancer on the front of the hull. A new TOW reload hatch cover with periscopes was used. Also many revolutionary interior changes took place. The seats in the passenger compartment were adjusted to carry two soldiers, with increased the storage capability of spare TOW missiles to 10.

In March 2003, the U.S. Army’s 3rd & 4th Infantry Divisions along with the 1st Cavalry Division that were equipped with lots of M3 CFV’s went into battle during Iraq war, Operation Iraqi Freedom. The 4th Infantry Division was equipped with the M3A3 CFV and was the only digital Infantry Division. In Baghdad’s street fighting the M3A3 CFV provided powerful fire support, but the U.S. Army started to study the survivability of mechanized equipment used in urban warfare, do mainly from RPG and IED threats. With the upgrade to the M1A1/A2 Abrams MBTs in the form of TUSK program, the Army provided the Bradley’s with Bradley Urban Survivability Kits (BUSK). The vehicle depicted in this kit represents the very latest model of the Bradley CFV current used by the U.S. Army..

MENG has followed on the very successful kit of the M2A3 Bradley w/BUSK III IFV with the M3A3 Bradley w/BUSK III CFV. The new kit comes without an interior which is now sold separately. I did add the interior kit and a separate review of that kit is also available. There are 12 frets molded in light tan plastic, two frets of clear parts, upper & lower hull sections, two PE frets, bag of track links, bag of metal tubes, soft plastic tarp & ammo belt, Polly caps, Decal sheet, and Instruction book. Options include; hatches can be positioned open or closed, gun movable, Tow launcher can be positioned in the firing or stowed position, The CITV is completely movable, workable glue-less track links and working suspension. All the parts have little to No mold lines and are very cleanly molded. The detail is outstanding, even on the smallest of parts. The fit is excellent with no issues. No antennas are included with the kit, only the bases.

The build starts with the road wheels and suspension system. The suspension rods are flexible and included in the kit are metal tubes used on the shock absorbers which allow the whole suspension to move. In step 6 the instruction call out for removing the molded on hull periscopes as the CFV version did not have these. A good sharp blade will do the job. In step 7 before you assemble the upper hull to the lower hull this is a good stopping point in the build if you are going to build the interior.

Steps 8 thru 26 deal with the lower hull. In step 18 it calls out for assembling the tracks. They are very easy to clean up and just snap together without any glue and are completely workable. Step 27 thru 42 deals with the turret assembly. Step 27 is a good point to stop and refer to the interior build instructions if you are building the interior. All the parts have excellent detail and fit together with no issues. The one piece slide mold 25mm barrel is the current fluted type and is exceptional. One note is that the kit provides antenna base mounts, but no antennas. I added a set of aftermarket brass metal ones.

On one of the PE frets there is a heavy PE mask for the road wheels and the track pads. This comes in very handy in the painting process and speeds things up greatly. On the back cover MENG provides a color reference chart for Vallejo paints. I used Tamiya paints and did a quick reference conversion on my own. This is can be done for any paint brand.

There are two color markings photos provide. One for the, 6th Squadron, 9th Cavalry Regiment, 1st Cavalry Division, U.S. Army Fort Hood United States 2014; and the second for, 4th Infantry Division, U.S. Army Fort Carson, United States 2013. I choose the first one. I added some stowage to the model in the form of MRE boxes and bottle water cases. I kept the stowage to a minimum as depicting a vehicle that was heavily laden with equipment was not in keeping with the marking as these vehicles were stationed state side.

MENG has done an excellent job of following on the heels of their M2A3 Bradley w/BUSK III with this kit of the M3A3 Bradley w/BUSK III. Another nice feature is the option of building the model with or without an interior (purchased separately), a cost saving for modelers that do not want to build an interior. Even thou MENG has produced a kit with highly detailed parts and has a lot of assembly steps; it does not take someone with advance skills to build. MENG has done a great job researching and engineering this kit so any modeler with basic skills can build it into a nice model. I highly recommend this kit to all model builders. I want thank MENG model for providing this kit for review. A truly enjoyable build!

Tracks and road wheels
Previous Next