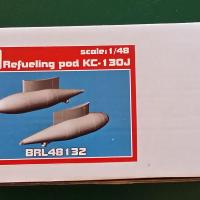 Used for air-to-air refueling, Lockheed’s KC-130 and HC-130N, HC-130P series of aircraft came with two air-to-air inflight refuel (IFR for short) pods, one on each outer wing just outboard of the flaps. Later, the HC-130H, MC-130E and MC-130H aircraft were modified with these refuel pods. This conversion set replicates those later modified aircraft and the current KC-130J and HC-130J IFR pods.

This resin modification kit comes with 6 parts, three for each IFR pod, including a small phot-etched fret for the tail end of each pod. My sample came with the sprue runner broken off the nose of one pod, the break being at the sprue-to-pod joint, requiring some sanding and putty to smooth it out.

The hardest part on this resin kit is the IFR pod tail to main body attachment. Careful sanding and squaring off will help immensely. I noticed that the tail section’s diameter was slightly larger than the main body’s diameter. Some putty and sanding took care of that.

On the aft end of the pod, there is a photo-etched “basket” that protects the IFR pod lights from being struck by the refuel hose. I would recommend attaching this part last, as that would make the IFR pod lights easier to paint.

Overall, I am quite satisfied with this resin conversion kit. With some work on a few panel lines, and a differently shaped “basket”, the IFR pod would look exactly like the original Lockheed-built IFR pods.

I wish to thank Brengun for providing this wonderful sample.