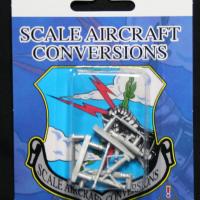 SAC gear does require some cleanup for the rare cases there are still seam lines. You many also sand and prime the struts to remove some of the rough texture that appears in some areas. Installing the new gear requires CA glue or non-traditional modeling adhesives. SAC recommends that the gear is for experienced modelers that are familiar to working with metal gear.

When you need strong landing gear that will not let your model down, SAC has you covered. I would like to thank Scale Aircraft Conversions for this review sample.