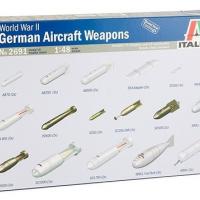 The light grey sprues have no excess flash and adequate attachment points so you don’t lose any detail. The sprues contain all you need to do all of the bombs, racks, fuel tanks and gun pods. Besides the sprues, you get a set of decals for the bomb markings.

Assembly is very easy and the fit is good throughout. There are some things I would have preferred to use styrene or rod in some places, such as tail supports, but the kit parts are nice enough. The hardest part of assembly was to ensure that the tail pieces were 90 degree angles. Just a little glue and check the seams with Mr. Surfacer and I was ready for paint. I had to replace my Dinort fuses with tubing and a plastic disk because I was ham handed and broke it off while trying to clean it up, twice. That was my fault and not a function of the kit. You just have to be careful.

The SD (anti-personnel) series of bombs has been difficult to find, especially the smaller ones. This set provides two each of three different types of SD bombs. I can’t remember the gun pod ever being available before. The same can be said for a number of the bombs.

On the downside, the 900 liter drop tank needed to have circular filler scribed into it to match the photos in the kit. The mounts for the ER4 are not clearly shown on the instructions. I used a Focke Wulf kit and aligned them with the openings because that is where I’ll be using it.

Painting is pretty easy. The instructions are very informative about bomb types and the coloring of the bombs, as long as you read the instructions. For the most part the bombs are sand-grey, RLM 02, RLM 65 or RLM 71. I did this with various paints and added streaks with lightened color. Some filters and Mig Pigments were added to further enhance the weathering.

The decals, especially the bomb names are a little overstated for my tastes and their positioning is not clearly shown. Also there are some errors in the instructions for the decal callouts. On the AB 250 there is no mention of decal 15 the name of the bomb container. Same thing goes for the AB 500. On the SD 250 there is either a wrong decal number or the decal to use should be decal 8. Either way it will make sense when you go to apply it.

If you want to add something to a diorama this is an easy way to do it. If you want something just a little different then this may be up your alley. You can easily arm a couple of models with this kit. Simple construction, easy painting and decent decals make this a fun weekend build.

Thanks to Italeri and IPMS/USA for the review copy.