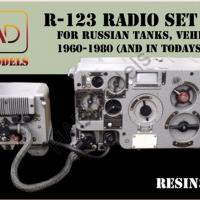 HAD Models has introduced a 1/35 scale Radio which represents the kind found in Russian tanks from 1900 to 1980 but also could be applicable to present times also. The set consists of two cast resin part and three pieces of photoetch. The resin and photoetch are very well done and initial building is simple.

The two radio bodies are removed from their casting blocks and sanded smooth. The photoetch is trimmed and added. One piece on the larger set to represent a base with vibration pads and two pieces on the smaller radio to represent the same thing. That’s all she wrote for construction. There are no particular directions for painting put there is a very nice color insert showing a picture of the actual radios. They appear to be a light gray and that is what I went with to get the base color. I then picked out the black dials with a brush. I then added a black wash and used red on some of the dials. There are markings on the pictures but no decals included so I dug up some generic markings from some old sheets and added a couple for interest. A quick shot of flat and the radios were done. Note that the connections shown between the two pieces on the web site pictures are not present or shown in the kit.

These radios are very well done and I do recommend them for enhancing your Russian armor. I would like to have had the cabling between the boxes and a few decals to make it truly shine but it is better than the sets included in the kits.

My thanks to HAD Models and IPMS/USA for the chance to review this set.