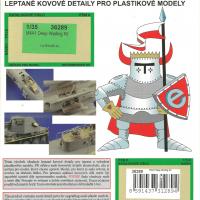 The need for armored support early on during an amphibious invasion was indicated early in the war. It was apparent that there might not be a chance to unload armored vehicles directly on the beaches. This meant that invading armor would need to be unloaded off shore and wade to the beach. In order to do this the tank needed to be waterproofed and a means to supply air to the intakes and to dispel exhaust gases would have to be designed. The answer to this problem was the deep wading kit. These were usually manufactured on site and consisted of a quick release upper stack mounted to a lower stack. The forward stack was for the intake and the rear stack was the exhaust. Once the stacks were in place, the tank was further waterproofed by sealing the transmission, the glacis machine gun, the muzzle of the main gun, the gun shield, hatches, lights and ventilators. Just about anything that could spring a leak was sealed. Quick release jettisoning ropes were attached to the stacks in order for a quick release of the upper stacks once the tank reached the beach.

Deep wading stacks have been ignored for years by the plastic kit manufacturers. Only two kits I know of have been released with deep wading stacks. Academy had a pair in their Marine M4A2 and Italeri in the Marine M4. There have been resin stacks out there but they were hard to work and weren’t hollow so displaying without the upper stack in place was not very convincing. Finally Eduard has released a photo-etched set designed for the M4A1.

The cover sheet says the PE set is for the Eduard M4A1, which is the re-boxing of the Tasca (Asuka) kit. So I used the Tasca M4A1 for the review build as I do not have the Eduard release of the same kit. During the construction of the stacks I test fit them on the engine deck of a Tamiya M4 to see if they would fit. The Intake stack base would fit fine with a little minor trimming of the splash shield strips around the engine deck intake grille. In order to place the exhaust stack base to the rear of the tank it is necessary to remove the air filters. As my M4 build already has the filters in place I did not want to sacrifice them just for a test fitting of the exhaust stack base. However, in dry fitting to the rear of the Tamiya M4 it looks like the stacks would work there as well. This makes the set a little more useful not being tied down to one version of the Sherman tank. Of course this only works with the M4 and M4A1 as they had the same engine deck and rear bulkhead.

As you can see in the image of the PE fret, the upper stacks are etched as 1 part, which includes the screening. My review set was damaged in shipping and the screening and stack were bent. This was easy to unbend; however the attachment points of the screening to the stack were very small and fragile and did not survive the repair of the shipping damage. Also the screening on the second stack did not last once I started bending and folding the stacks together. This turned out to be a non-issue as they were easy to apply to the stacks once the stacks were bent and assembled. I thought about using solder to assemble this set but the one piece upper stacks it would be near impossible to solder from the inside. So I elected to use super glue for assembly.

I started the set by bending the base of the intake stack (part 4). This I glued together using Gorilla Super Glue. I discovered this super glue by accident and I really like it. It’s a little thicker and doesn’t run like the thinner glues and it’s strong. Next came the screening for the intake base (part 9). This folds nicely. There are 6 tabs on the bottom edges of the screening that fit into slots on the base. These fit nicely and once the screening was in place I moved on to the quick release tabs. These are very tiny parts that are folded 90 degrees with an even smaller T-bar placed in between the folded tabs. The T-bars may actually be a poor rendition of wing nuts. It was hard to tell as they were only as thick as a strand of hair. Anyways I did not put the T-bars in yet. I waited until the clamps were attached to the base. Once the clamps are folded they are supposed to be placed into slots on the base of the intake. I found it impossible to fit the tiny tabs into the tiny slots. I ended up using the slots as markers and glued the clamps directly to the bases without slipping the tabs into the slots. When the glue had set up I bent the tabs slightly outwards to insert the T-bar. Then I bent the tabs back to trap the T-bar in place.

Now I moved onto the base of the exhaust stack (part 7). Like the upper stacks this major piece is etched as one part with a smaller piece (part 6) added to the bottom. Eduard supplied small tabs (part 10) that are bent 90 degrees and glued to the inside of the stack. This gives a good surface to start the gluing of the piece once it is bent into shape. After gluing the 2 pieces together I added the clamps. As before these were impossible to get into the slots so again I used them as markers and glued the tabs directly to the base without using the slots. On the outside surface of the stacks are small etched markers. On the exhaust base these are for the bracket (part 12) that secures the top of the base to the rear of the tank. This is bent 90 degrees and glued to the exhaust base at the marks provided. A couple of mounting plates (parts 2-3) are added to the bottom sides of the stack base and its ready for test fitting to the rear of the tank. In the interest of meeting the review deadline, I started building the M4A1 before receiving the review set. I had added the air filters not aware that they didn’t need to be there. So I had to cut them off to get the exhaust base to fit properly. Once the air filter cans were removed the exhaust base fit perfectly with no gaps.

Both the upper stacks are identical assemblies. As in the exhaust stack base tabs are bent 90 degrees and placed on the inner surface to give a gluing tab. Be sure to bend stacks in the proper direction as there are etched markers on the outer surface of the stacks to place the brackets that secure the upper stacks to the bases. Once the stacks are bent into shape and glued the clamping brackets are attached. These are bent 90 degrees. There are small slots etched in them. This slot needs to be on the bottom when glued to the stacks. Once the upper stacks are placed on the bases, the tiny, hair thin, T-bars are swung up and into these slots, securing the upper stack to the bases. I didn’t rely on the T-bars to secure the stacks; I glued mine down and then swung the T-bars up into the slots.

Once the assembly was completed I primed the brass parts with Model Master gray enamel primer. This gives an excellent base for the Tamiya Acrylics I like to use. Once painted, I glued the parts on the tank and glossed it up for the decals and then the weathering.

All in all this was an enjoyable build. I thought a nice touch was including the screening on the bases as well as the upper stacks. With the screening included you could model the Sherman with only the bases attached. In reality, the upper stacks were discarded as soon as possible after reaching the beach. So it is common to see pictures of Sherman’s, with only the lower portion of the wading stacks attached. That’s one drawback of this set. There is no means of quick release of the upper stacks. With the attachment method depicted on this set it would be necessary to exit the tank to disconnect the upper stacks. Also to be completely accurate it would be necessary to seal up the tank as was common for vehicles being readied for an amphibious landing.

This was a nice set that is useable on kits released by other manufacturers, not just the Eduard/Tasca kit. That includes the M4 version as well as the M4A1. This set is recommended to anyone that has a little experience dealing with photo etched parts. Thanks to Eduard for the review sample and IPMS/USA for allowing me the chance to review it.