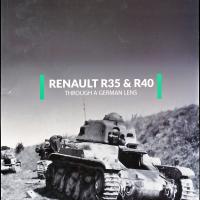 The Renault R35 and R40 were French light infantry tanks developed in the mid-1930s and still in widespread service during the disastrous 1940 Western campaign. Lightly armed and armoured, these vehicles were no match for the PzIII and IV of the German Panzer armies.

In this book, author Ranger has compiled a surprising number of original photographs taken by German troops in the aftermath of the 1940 Battle of France. Most are reproduced two to a page, and due to the size of the originals, copy quality is mixed, from very nice to poor. There is a short section of photos of Renaults after they were captured and put back into use by Germany in the Balkans.

Each photo is accompanied by a lengthy caption detailing any notable features and, where possible, where and when the photo was taken; however, beyond company identification markings, no unit information is given, as it didn’t matter to the original photographers and the French never went overboard on battalion/division identification markings.

In addition, being black and white photos, and as most French armour paints of the time were very low contrast when compared to each other, very little in the way of colour scheme information is possible, or given; a major minus for us modellers.

On the other hand, many of the photos are extremely useful to those building either the Tamiya or Heller kits, as they show a wealth of detail of the vehicles themselves, many in a state of some distress but some abandoned intact. In this respect the book is of value to the modeler.

As a modeler, I found the lack of colour information to be an issue. I think the book could have been of much greater value to the modeler if there had been at least a brief discussion of French armour colours in 1939-40. Even better would have been some colour profiles based on the photos – the author appears to be an expert on French armour, so a proviso that interpreting black and white photos is fraught with issues could have been balanced by some informed and educated reasoning. I think Mushroom Model Publications missed an opportunity there. As it is, the modeler is left to guess.

Nevertheless, the photos are, generally, nice and this is a resource for the historian. Reservedly recommended. Many thanks to MMP for the review sample.