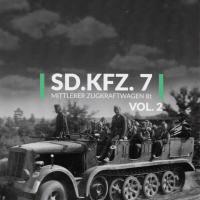 Camera On 17 Sd. Kfz. 7 Mittlerer Zugkraftwagen 8T Vol. 2, is number 17 in the “Camera On” series published by MMPBooks/Stratus and is a follow up to volume 1. The author, Alan Ranger, has written several books in this series with subjects such as “German Horse Power”, “The Einheits-Diesel WW2 German Trucks to “No 22 Krupp Proze Lorry”.

This A4 format paperback has 80 pages with 140 plus photographs from the author’s personal collection. Most are previously unseen and taken by ordinary German soldiers. The book is comprised of an introduction, a short history of the Sd. Kfz.7 on two pages and the remainder of the book covering a few of the various sub-types. The author provides in his abridged history of the Sd. Kfz.7 several facts including the number of units produced, at what plants, and an excellent table with the different production variants. The images are clear, with a few a little grainy given the age, and as the author describes are no more than 25mm by 45mm in size. The author has included captions with each image giving the reader a detailed and, in some cases, rather lengthy description of what they are viewing.

The book is divided into five sections with a couple sections only being one page.

The first section, “Sd. Kfz. 7 HLm11” is the largest covering pages 5-64. Numerous photos depict the Sd.Kfz towing anti-aircraft guns, in environments such as stalled in mud, deep fording water, and even images of burnt-out units. Most images show the German soldier in or around the vehicle.

Turning to page 15 we see a photograph of a group of soldiers casually standing near the Sd. Kfz.7 towing a s.K 18 105 howitzer. The author draws the reader’s attention to the two-tone paint scheme of the canvas top. Something this reader didn’t notice until reading the image caption.

Page 25 draws our attention to a winter scene in the top picture with the Sd. Kfz 7 having its wet weather covering. Notice the canvas top, the window panels, and door coverings. Another great idea for the modeler.

As we read further in this chapter the author has included an image on page 28 depicting a group of soldiers training to be drivers in a Sd. Kfz.7. Also, note the author brings our attention to the folded down windshield with a canvas covering.

Moving onto the next chapter “Sd. Kfz.7 with 2cm Flakvierling 36” starting with page 65 showing a Sd. Kfz.7/1 anti-aircraft half-track with only two Flak 38 20mm cannons fitted to a Flakvierling 38 body. The author has included several images in this chapter of the Sd. Kfz.7 7/1 flatbed variant 20mm Quad some with ammunition trailers.

If the author’s goal in writing this book was to show the average German soldier in wartime settings, and to show images of the Sd. Kfz.7 vehicle, then I believe his goal was met. The author includes a caption with each image providing information, some with minute details often unseen by the untrained eye.

This undoubtedly is a great resource for the historical buff as well as an excellent reference for the modeler, beginner or skilled. The author presents a plethora of inspiring ideas through images many unseen before.