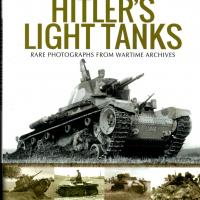 Synopsis per back cover: Hitler’s Wehrmacht led the way in armoured warfare as the successful blitzkriegs in Poland and North West Europe in 1940 so convincingly proved. The contribution of light tanks such as Panzers I, II and 35(t) was critical.

As the war spread to the Balkans, north Africa, and the invasion of Russia, German engineers worked tirelessly modifying existing light tanks and developing new models. The growing Soviet armoured threat, in particular, spawned tank destroyers such as the Marder III Panzerjäger, SdKfz 138/1 and 139. Anti-aircraft variants included the Flakpanzer 38(t), the SdKfz 140/1 reconnaissance tank armed with a 20mm turret-mounted gun developed from the SdKfz 22 armoured car, whereas the Aufklarungerspanzer 38(t) carried a 7.5cm gun in the support reconnaissance role.

In the final stages of the war light tanks were phased out and the Marder and 38 (t) were up-gunned; the Wespe was adapted from the Panzer II chassis.

This superbly illustrated book gives a comprehensive overview of the multitude of vehicles and variants that came into service. With the text and captions providing technical data, the images show this formidable array of fighting vehicles in action across the theatres of war.

Paul Thomas is an expert in WWII fighting vehicles and an avid collector of contemporary images. He resides in Braintree, England.

This is an outstanding photographic reference book that is rich in imagery and also specific information regarding light panzers. Each of the high-quality photographs contains information such as location, tank type, and specifications which are depicted.

Chapters begin with a one-to-two-page overview of that time period along with the tank variants used and other historical information. The Appendix is just as informative. It contains seven pages listing all of the Panzer variants through the years as well as very detailed information of the developments / modifications differentiating them.

I highly recommend this book to all afficionados of German armor as well as those interested in World War II history. This will make an excellent addition to your reference collection.