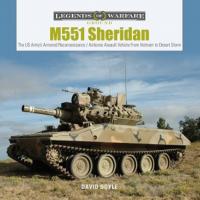 In the introduction to one of David Doyle's latest offerings, he writes: The M551 Sheridan is often referred to as a light tank, but in actuality it was an armored reconnaissance/airborne assault vehicle. The M551 was designed to be a lightweight, amphibious, air-dropable vehicle armed with a massive 152 mm gun that doubled as a rocket launcher. The gun launcher was designed to fire the MGM-51 Shillelagh antitank missile, or 152 mm conventional rounds with a combustible cartridge case. The vehicles saw extensive use in Vietnam, Operation Just Cause in Panama (where they saw their only combat air drop), and Operations Desert Shield and Desert Storm. The Sheridan ended its service with the US Army masquerading as Soviet Bloc vehicles at the National Training Center.

Now if David Doyle's name sounds familiar you might harken back to the M551 Sheridan in Action book published by Squadron, cause it's the same guy. This 9x9 offering from the Legends of Warfare series has a hard cover binding and contains 231 color and black & white photographs from a variety of sources. After a brief introductory chapter, the tome is divided into three parts:

The Development section deals with the early prototypes and testing of those vehicles. A particularly fun series of photographs are those that show an early M551 with flotation covers on the road wheels. There are a myriad of ideas for the modeler on unique ways to display their finished modeling project throughout this volume.

The Armament section deals with...wait for it...the armament of the M551 Sheridan. With emphasis on the 152mm gun/launcher system there is also a number of photographs of the secondary armament. One on the many things that I learned from this book is that the early Sheridans sported a 'spotting rifle' coaxially mounted with the main gun.

The Field Use chapter focuses, primarily, on the M551 Sheridan in Vietnam. There are great photos throughout this section of the Sheridan during field testing as well as its employment by armored troops in Vietnam. As mentioned earlier, the M551 Sheridan spent its twilight year as a platform for adversary vehicles at the National Training Center in California. These Sheridans converted to look like Soviet vehicles are also covered with an extensive array of well documented photographs. Of particular interest for me are the staged photos showing the Sheridan ‘in action’ on the East German border during the late 1970's. More great display ideas!

One aspect of Mr. Doyle’s work that I truly appreciate are the captions that accompany the archival and detailed photographs. Nothing brief, vague, or trite about any of the captions. His concise and informative text exploring the M551 Sheridan with each photograph is most welcome. This volume will make a worthy addition to your modeling library.

My thanks to Mr. Doyle and IPMS/USA for the review copy.