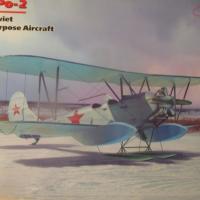 The Polikarpov U-2, later redesignated PO-2 in honor of the designer, Polikarpov, was originally designed as a light training and general purpose biplane, making its first flight in 1928. Its construction was typical of the period, with mainly wooden construction and fabric covering. It was produced in very large numbers, starting in the late twenties and production lasted until the early fifties in the Soviet Union and later in other countries. It was used as a primary trainer, communications aircraft, light transport, reconnaissance type, and even as a crop duster. Over 30,000 were built, and a number are still flying in Europe and North America. I wrote a review of this kit last year, and since a new issue has emerged, I’m doing it again. It is a slight different model than the earlier one, and I like biplanes.

Even though vast numbers of this aircraft were produced, there isn’t a lot of reference material readily available on the type. A book from Kagero entitled Polikarpov PO-2, published recently in Poland, provides very detailed photos of an aircraft in the Polish Aviation Museum, but no example of colors and markings of other examples of the type. Some material is available on line, as Wings Pallette has some interesting color schemes.

The instructions for this kit, #72244, are quite similar to the previous issues, although color drawings are provided for four military examples used by the Soviet Air Force during World War II. The aircraft are illustrated in color, but there is not much information provided as to the specific models, although this kit represents the two seat trainer version and a light transport variant, for which wing mounted cargo pods are provided for two examples.

The instruction sheets themselves consist of a series of drawings showing the stages of construction. From the experience of building three of these kits, I would advise following the series of steps they suggest, as this will make basic assembly much easier. The instructions are very similar to previous ones, and are worth saving for reference. There is, however, very little historical information provided, on the general type and for the specific example for which decals are provided. There is a useful sprue diagram, which identifies the many tiny parts that should only be removed as they are used, as they are usually determined to escape if they can.

A very small decal sheet is provided, which is adequate for the four examples for which drawings are provided. The decals do not require trimming, and go on easily. They are a plus with this kit.

The kit includes more than 65 parts molded in grey styrene, along with 6 clear plastic parts. Other than paint, the only thing you will need is wire for rigging, as this plane does use a lot of this. There is a small amount of flash that needs to be removed, and some parts, notably the wings and tail surfaces, seem to be very thin, but they are probably accurate. The only thing I can think of for improvement is that the struts could have been molded so that the feeders were at the ends of the struts rather than in the middle. These require some pretty fancy trimming, but this is not impossible.

Assembly is very straightforward and logical. The cockpit interior is nicely done, and the seats attach to the floorboard, which is part of the lower wing assembly. The seats themselves are a bit fiddly, consisting of 6 pieces for each seat, and I ended up using superglue rather than regular plastic cement. Once the fuselage halves were joined, I filled the cockpit openings with foam rubber so that I didn’t have to mask them off. The basic assembly seemed to me to be better than most biplane kits, and all of the struts fitted perfectly into their respective receptacles.

I would certainly suggest painting the airframe and detail parts, especially the engine, before assembly, as there is some very intricate material here. I did the ski equipped light transport version, which was white above with light blue undersides. Some of the color information in the drawings is a little confusing, but it isn’t too hard to figure it out, especially if you check on-line sources.

Once the plane is basically assembled, some of the small detail parts need to be added. This includes parts of the control system which are mounted on the fuselage, two venturi tubes, and the engine, which consists of 10 parts, not including the propeller and the faceplate they say to use for the ski equipped version. This unit does not show up in any photos I’ve seen of the airplane, so I did not include it on my model.

Once the parts were all in place, the final step is the wire rigging. The instructions are clear as to where the wires go, and it is fortunate that only the rudder cables are parallel, with the others being single wires. I used straightened silver colored electronic wire for rigging, and the whole process only took about an hour and a half. When handling this kit, you have to be pretty careful, although if you use superglue on the wing struts, you should have no serious problems there.

This kit is a very good one, and even with moderate skills, it is certainly buildable, and even without the rigging, it will look good on the shelf. I prefer rigging, however, as the wires are certainly a necessary part of the aircraft. Don’t avoid this one because it is a biplane. It is a very important part of aviation history, and certainly deserves to be in any collection of 1/72 scale aircraft. I have six built already, three ICM and three KP kits, and I definitely prefer the ICM kit. Highly recommended.

Thanks to ICM and IPMS Phil Peterson for the review sample.