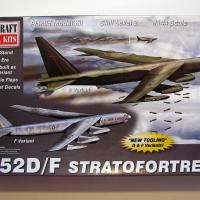 The B-52 is arguably the best bomber ever made. First deployed in 1955 as a high altitude “atomic bomber” later versions of it are still in use today.

Inside the box you will find 8 sprues of light grey and clear injected plastic. An 8-page instruction manual and a nice sheet of decals. Basically, only the fuselage halves and sprue F are new to this kit as everything else comes from, and is marked, for the B-52H kit. The one minor hitch here is that the very fine panel lines in the wings do NOT match those on the fuselage as these are more Matchbox like. The decal sheet is very nice and in register.

14 steps are used to make this kit and the first 6 deal with the fuselage, wings, stabilizers and flaps (which you can pose closed or open). Steps 7-9 are the assembly and instillation of the engines and wing tanks. A couple items that I dealt with here are that I left the flaps off until later (so I wouldn’t break them off) and also the engines until after the main body was painted (much easier to deal with that way). As far as the engines go, they went together well but did not fit on the pylons as the area where pylon and nacelle meet was off by about 1/16 on an inch. I just lengthened the point on the rear area of the nacelles and it was fixed. Also, the wind screen is the same one used for the H model and it does not fit this fuselage very well ad there is a gap at the rear of each side and will need to be filled.

Steps 11-14 are for wheel & strut assembly and instillation, tail gun instillation and external bomb rack assembly & instillation. Except for the engines and the windscreen, everything fit pretty well. And only a little filler was needed in the wing roots.

The decals went on easy and settled down pretty much on their own. I did use a little Micro Set just to be safe though.

It’s about time we got a new early B-52 kit and this one is nice. I recommend it to all modelers.

I would like to thank Minicraft for supplying this kit and IPMS for allowing me to build it.

Sprues A and C

Sprues B, D, E and F plus Fuselage Halves

Sir,  Thank you for the review.  I am building this one now.  I am stuck, however, on the decal that goes on the tail.  (Directions say “ Apply decal T before attaching part C5”)

The problem is I cannot find decal T on my decal sheet. I have decals A through E and a number of others that are numbered, but no decal T.

Can you help? Thanks a bunch!