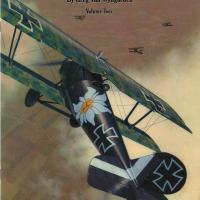 Greg Van Wyngarden has taken a new look at the Pfalz D.IIIa service in WWI. This is the second volume of a two volume set (Datafile 173: Pfalz D.IIIA At War!). Datafile number 21 by Peter M. Grosz came out in1995 so it is about time that Windsock revisited the Pfalz D.IIIa. The initial Pfalz D.III aircraft received a poor reception amongst German pilots as it was regarded as inferior to the Albatros D.V. That doesn’t negate the fact that it was still superior to most of the Allied opposition of the time. The Pflaz firm, however, did listen to the pilot’s concerns over the D.III and soon offered improvements in the form of the D.IIIa.

The cover features a sensational painting, “Ace of the Edelweiss” by Roberto Zanella depicting Otto Kissenberth’s mount. Ronny Bar contributes eight large color side profiles, plus a color three-view of 4203/17 of Jasta 72s. Ronny Barr’s art gets descriptions in the section ‘Key to Colour Plates’ that also includes the relevant photographs in this book that back up his artwork. Mick Davis grabs the pullout centerfold with two pages of new 1/32 general arrangement line drawings of the Pflaz D.IIIA including center section detail, fuselage sections, and wing sections. For those of you that want 1/48 scale drawings or those of you who still dabble in that odd 1/72 scale, Mick Davis also provides you the same drawings in Volume 1, Datafile 173. I counted 84 black & white photographs.

Greg Van Wyngarden picks up Volume 2 where Volume 1 left off, diving into the Pfalz D.IIIa’s service with Jasta 52. I really appreciate the first person accounts from both sides that bring you right into the action. Bavarian Jasta 80b is represented with some gorgeous clear black and white photographs; two that will grab your attention are of Ltn, Johann Schneider with D.IIIa 8107/17. Jasta 29’s history is discussed along with some striking pics of the ‘Tatzelwurm’ emblem (Clawed Worm) as flown by Ltn. D.R. Eugen Siempelkamp . Jasta 23 is represented as well as Jasta 34b, featuring Ltn. D.R. Rudolf Stark in different D.IIIa aircraft. Jasta 64w benefits from a war diary that portrays the trials and tribulations of inexperienced pilots and ground crew. Jastas 7, 18, 21, 23b, 32b, 37, 46, 48, 56, 58, 72, 77b, 79b, as well as many other aircraft with units still to be identified show up to display their unique markings.

Although not universal, most pilots on both sides considered the Pfalz inferior to the Albatros as is confirmed in the sections on Pilot Reports and Allied Impressions. This may have been due to less experienced pilots that the allies often encountered, but in the hands of an experienced pilot, the D.IIIa was still a lethal threat. The section, The Pfalz D.IIIa Described, is not a repeat of earlier Datafiles, but contains elements from the French evaluation of D.IIIa 8033/17. Final Flights and Postwar Use describes the Pfalz D.IIIa aircraft that survived the Great War and found their way into Turkey and into battle in several skirmishes, including against Lawrence of Arabia’s forces.