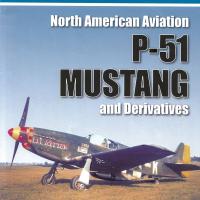 This is volume five in the special series. Warpaint books are well known to the modeler and historian alike and this book follows the same pattern as others in the series. The book is divided into 15 different chapters. Beginning with design and a look under the skin the first two chapters cover the development of the Mustang from prototype to P-51H as well as a look at structure and various difference between the models such as engine, armament, and other components.

The next nine chapters cover the Mustang in WWII, from its beginnings with the RAF and its use in North Africa through all major Army Air Force use. The US Air forces covered are the 8th (longest chapter at 16 pages. Followed by the 12th,15th,7th,5th,10th, and 14th in that order. Each AF chapter gives and overview of the AF and its fighter squadrons and their combat deployments and uses.

The next 2 chapters cover the Mustang postwar in the USAF, ANG, and combat usage in Korea. Followed by Chapter 14 which covers Mustang use by foreign air forces. Briefly discussed are those that served with Australia, Bolivia, Canada, China both communist and Republic, Costa Rica, Dominican Republic, El Salvador, Guatemala, Philippines, and many others. Also covered here are those captured by the Germans and Japanese during WWII as well as lesser know use by the Somali AF and 3 civilian Mustangs flown to Cuba to fight Castro and how they were absorbed into the communist government’s AF after hostilities ended. Literally every nation that had a Mustang is covered.

The final chapter covers an assortment of tidbits and unique uses from a Chase plan for the US Army, P-51s with various rocket attachments to increase speed and Project seahorse which covers the proposed carrier version for the US Navy. One aircraft was modified and conducted simulated carrier quals at the runway at the Philadelphia Naval Yard. The book concludes with two pages of 1/72 scale drawings and 32 beautiful side profiles from the Mustang Mk.1 to late model P-51D/Ks

This is an excellent volume filled with a lot of information and photos. It will be of great use to the modeler, Aviation and P-51 enthusiast as well as the historian. There is something for everyone within the covers. The profiles show many different schemes, some well known some not. I highly recommend it to all!