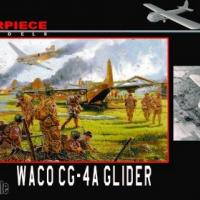 IPMS/USA welcomes the proprietors of Masterpiece models back, and serious appreciation for supporting the IPMS USA reviewer corps with yet one more of their newest releases, in a scale never before attempted: 1/35th! A perfect diorama subject, we certainly will see some of these in a D-Day or Market Garden setting… And my personal thanks to IPMS leadership for sending it to me to be reviewed.

Sometimes I wonder at my sanity; then my wife reminds me that I really am over the edge and I know…

Resin kits are a case in point; requiring truly radical and different skill sets for a project. Rare (Usually) subjects or subjects which economically do not make sense to cut a mold for injection molding. Resin is rarely forgiving, and on occasion makes you question why you are in the hobby.

This kit is appropriately complex. Included are internal details allowing the modeler to open the nose, detail everything out, and in the end have a really cool, artistic kit that you WORKED to achieve success with. Shape appears spot-on, and details which you would not know of otherwise. After opening the kit and breathing “hoo-boy”, you know you are in for a workout. Flashing is used to add strength to the parts while being manufactured, in the old manner of “Wafer molding”. This must be dealt with.

BY THE WAY, this is not a condemnation of the kit or process to manufacture, only a disclaimer up front that you will have to go the extra mile and do heavy duty work to build it. No “Dove ® for soft skin” cleaning here… Washing the parts is your first thing. I used Dawn dishwashing detergent ®, 409 ®, mold cleaner, and “Blech White” ™ trying to clean the parts, including brushes, scrubbing, and warmish water. Most of it cleaned up, but I still built the majority of the fuselage only to have the primer flaking off at the touch of my hand. I therefore returned to and recommend nasty ol’ lacquer spray automotive primer in a rattle can if the California laws have not totally outlawed it where you live, as it pretty well eats and attaches itself to everything. I could have saved three weeks…

First warning though: Dust masks during sanding are highly advised… the fiber bits in these kits can literally fill your lungs, and as they are inorganic dust-like fibers, have sharp edges that can lead to internal lung hemorrhage , lung cilia blockage, labored breathing, etc. They also are heavy and not readily removed by coughing. It is extremely difficult to clear up from your lungs. (It’s mistakenly referred to as “Toxic”… it is rather a dangerous irritant.) The two-part resin and hardener are also dangerous if you ingest or inhale them… but what are you doing THAT for?

For those who don’t know what World War II was, The WACO CG-4 Glider (Pronounced “WaahKho”, not “WayyKo” like the town in Texas), was an important tool in the fight against Nazi attempts for world domination in that war. Unlike sailplanes, which can climb in thermal lift and fly long distances, the Waco was a winged glider-only truck, designed to drop in to a landing zone and deliver heavy cargo and squad-level personnel teams. Dragged through the air like a dog that doesn’t want to go for a walk on ¾ inch nylon and steel rope, the aircraft released the tow-line and essentially glided at a steep angle to a rolling controlled crash. If everyone lived through this event, the cargo (troops and whatever else was being carried) had the dubious honor to engage a fight already in progress in most cases. Envelopment of the enemy was the goal, and with mass usually worked.

The gliders which were not destroyed were then disassembled and trucked out after the combat had subsided, to be used again later. In most cases, the gliders were piled up and burned, having served their purpose like a Kleenex. (NOOOO!)

For more details, watch the movie “the longest Day”, circa 1963. D-Day was where these gliders made a name for themselves, carrying Army divisions behind the enemy’s FEBA and generating confusion and mayhem. ...And killing a lot of pilots and cargo “fighting men” in the process. Remember, in 1944 it was less than 40 years since the pioneering pilots of heavier than air vehicles were able to successfully fly… it is astounding to me as to how rapidly technology advanced in the past century. By the way: the Pilots? Once on ground, your flight pay stopped and you were expected to fight like everyone else.

Upon opening the box, you will find resin cast in the standard manner but with a lot of flashing on the frames, simulating metal tube framing for the interior of the aircraft. I had some initial trepidation on how these would work, but have found after removing the flashing the resin is flexible, yet durable and does not permanently deform or crack easily. Careful work with sharp #11 blades seemed in order; however, after about three hours of this tedium with six frames cleaned up, I actually determined a better way was to use a LARGE box knife with a new blade… the wider blade maintains better directional control while cutting, and, as I found the #11 roaming away from the desired cut due to the resin fighting back, found the box blade to be much less of a roamer with a deeper, more precise cut. And my hands were cramping up from having to steer/hold that little bitty #11 knife handle, which added to the roaming knife blade. Remove the flashing, (but keep the flow runners for strength and something to hold on to until you are ready to use the tubular frame) and use side-scraping technique to remove all the flash. You could also use fine emery boards. I don’t recommend using anything heavier than 400 grit; otherwise, the risk of breaking the surprisingly strong and durable resin is enhanced due to flexing of the frames under tooling. Work these down, make sure they are round in appearance verses “D” shaped from vociferous cleanup, and then set them aside in a separate box to prevent breakage.

I decided to go ahead and paint these items the appropriate zinc chromate green color. I primered them all with spray flat gray Tamiya primer. This changed later after the paint flaked off while building. After re-attack cleaning with denatured alcohol, acetone, and finally “blech white”, the interior of the fuselage was re-primer sprayed neutral gray over the entire fabric envelope once applied, before color to prevent bleed-through. I then enlisted a dark green sharpie pen to color the “t” frames and nose interior bracing.

Next up is the fuselage. You need to clean up all the various windows and edges… more knife and file work. Same for the wings… these are heavy big two-piece suckers, and could be sword blades. I took the opportunity while I had everything out to drill out all the indicated bracing holes before committing anything to paint or superglue and epoxy.

One dilemma solved early was identifying small parts on the pour troughs. If you hold the part up to a strong work light with a dark background, the translucent resin allows the light to filter through and causes the part number to “Glow” next to the part. Pretty cool… another tool added to the old modeler’s tool bag.

The detail on this kit is just amazing; the research presented an artist’s dream for all the internal workings, control cables, pulleys and framing. Wood grain panels for the pilot compartment flooring and nose section are printed on decal and paper; installation is simple as well, just cut out an install with white glue like gator; I chose instead to use Vallejo Decal fix, which is a polyurethane glue and tends to not attack the inks for some reason (Maybe because it dries so fast with less water in it), so I believe that’s more appropriate. The decals are a bit transparent, and therefore background makes a difference. Light tan for the flooring worked on the main section. I did some painting and drybrush for the cockpit plywood, plus a few sections where dividers and more sharp #11 blade work ensued.

The rear fuselage section receives the tube and crossbeam treatment as well… there are a LOT of them, and this kit includes just about all of them that can be seen from the front with the nose up or down… and that also includes the side door.

Fuselage assembly is conventional without any locating pins. Except this isn’t a conventional model. Imagine making a shipping box with different shapes, using only flush joints with “some” overlap to make four surfaces; two sides, top and bottom. I use card stock and tape on the exterior to key the parts and thick superglue together… I did not have time to design and assemble a bench jig to hold it all together. The instructions recommend Epoxy as it is not as brittle. It is, however, very messy. And as it takes time to set, it is prone to shifting before setting hard. If you are not under a deadline, this method would be preferred, as you can make the jig and ensure everything is lined up. I used Gel and thick superglue for the majority of the project, even though it was difficult to sand and control. Always something…

PART TWO for next time: Stabilizers, fin, elevators, rudder and wings along with other details

Upper and Lower Frames Before Cleaning and after

In Progress Interior and Fuselage
Previous Next