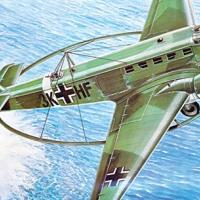 Several kits have been issued of this venerable aircraft over the years. The old Airfix kit was the first, and although it is showing its age, it can still be made into an acceptable model. Heller issued a Ju-52, probably in the mid seventies, and Italeri was not far behind. The Italian kit has been issued in several variants, including a floatplane and an ambulance, and later they issued the Minesweeper version with the 45 foot wide aluminum Gauss ring, with electrical power provided by a 55 hp. Mercedes engine mounted inside of the fuselage. According to my sources, there was a cooling radiator mounted under the nose section for cooling the engine, but I can’t find a photo with any details, although one shot in the Squadron In-Action book shows some kind of rectangular structure that could be the equipment in question.

The aircraft were flown low over the water when magnetic mines had been dropped by RAF aircraft, the idea being that the electrical field created by the Gauss ring would simulate a ship passing overhead, detonating the mines. The idea was sound, and the RAF did the same thing with Wellingtons. The Ju-52’s were used along the Atlantic coast, and in the North Sea, as well as in the Baltic and Adriatic regions. When the RAF dropped magnetic mines in the Danube in 1944, JU-52’s were sent to Hungary where they swept the river until early 1945, when they ceased operations due to fuel shortages.

There is plenty of reference material available on the JU-52, including two Squadron in Action issues, (Numbers 10 and 186), one old Profile (No. 177) and several references in various books on Luftwaffe aircraft. Eric Brown’s classic “Wings of the Luftwaffe” has an excellent cutaway drawing, as well as a fascinating description of what it was like to actually fly this aircraft, as well as many other Luftwaffe types.

A huge instruction sheet is included, as this is needed for a kit of this complexity. No less than 10 pages are provided, all on one long fold-out sheet. Included is a short history in six languages, a sprue diagram, a color guide, exploded drawings, and four views for two aircraft. The first (A) is HF+3K of Minensuch-Gruppe, France, 1943, and the second (B) is “White B” of Minensuch-Gruppe 1, Baltic Sea area, 1944. The only problems are that the first drawing lists the unit codes backwards on the left fuselage side. The second aircraft can be verified, as a side view photo of the particular aircraft in flight appears on the back page of the Profile publication. From the photo, the decal cross is incorrect, as the cross was white outline only, whereas the kit decal provides a black cross. Both markings are too large, so I replaced them with ones I had in my decal storage boxes. I suspect that the under wing cross is also too large, but I used it anyway. The instrument panel decal is totally useless, being a black panel with white dots representing the instruments, whereas the actual aircraft usually had an RLM grey (02) interior and panel with black instrument faces. No problem, as Jim Pearsall’s trusty computer skills had a new decal made up in no time, and it looks much better now.

Cast in soft, very workable grey plastic, this kit is a reissue of one originally issued in the middle 1970's. It is a very well engineered kit in most respects, and snaps together easily with little real effort. The seats, however, appear to be a little large, being almost 3 feet wide in scale. Maybe the Luftwaffe had to build their airplanes so that Hermann Goering could fit into the pilot’s seat, as this was well before the introduction of wide bodied aircraft. I used the seats anyway, but they are HUGE. The corrugations are nicely done, and the parts fit in such a way as to minimize any problems. Component fit is excellent, except for the wing to fuselage joints, which require some filler to get the proper dihedral angle. The engines are well detailed, but the side cowlings caused some problems, as they kept breaking apart. The engines have nicely detailed exhaust rings, and these are supposed to be glued to the backs of the engines. It doesn’t work on the wing-mounted engines, but the nose engine exhaust attaches nicely to the engine, creating a nice realistic effect. There are a lot of detail parts making up the powerplant assemblies, but the overall effect is really very good. The side windows snap into place with no effort, but be sure to follow the instructions, as some windows will be overpainted, and two of them have holes for machine gun positions. I ended up cutting off the inside part of the guns, gluing them to the window, and masking over the front. I then glued the barrels on after final assembly, and it worked great.

Once the fuselage is assembled, the wings can be attached. Be sure to drill out the proper holes for the antenna struts, as the instructions are wrong here. They have the holes indicated for drilling in the instructions, but the hole for the inside struts (110) aren’t mentioned at all and have to be drilled out, while the other struts (109) have the holes marked inside of the nacelle, whereas they should be outside, as they are shown on the final assembly drawings on Page 11.

Be careful to mark the parts of the Gauss ring, as once you get it off of the sprue, it will become confusing. I glued the three parts together early in the process, and a little filling was needed to smooth it out. The holes are drilled in all of the right places, but struts 110 and 109 are hopelessly too short, and should be replaced by plastic rod. The rearmost mounting tab receptacle underneath the tail assembly is not marked on the kit, so drill it as shown on Page 11. I estimated the location, and it worked out fine. My suggestion would be to attach parts 105 on the lower wings, after painting, and then attach the ring only to the tail section and the 105 struts. Then the other struts can be measured, painted, and attached individually. In addition, the pitot tube does not look like some of the units I’ve seen in photos, but I’ll assume that it is correct.

Both aircraft use a standard 70/71/65 paint scheme. The first aircraft (A) had a white fuselage band, while the second (B) had the yellow markings typical of Eastern front aircraft. I masked all of the windows first, and then painted, starting with the yellow markings, then 65, and then 71 and 70. I then used an overspray of medium brown to dirty the plane up somewhat, followed by some silver paint chipping to add to the realism. These airplanes were workhorses, and were probably not kept up in pristine condition, so the dirtier and scrungier, the better. The kit decals snuggled down pretty well, although I did use profuse amounts of Microsol to get them to seat onto the corrugations, which they did quite well.

One last item is the bracing wires. The ring was braced with four cables, which extend from a small “V” mast just ahead of the gunner’s dorsal position, and two more bracing wires that go forward several feet. I used electronic wire of a heavier gauge than usual, and was satisfied with the effect. They don’t carry a load like piano wire would, but they look the part.

This kit is an oldie but goodie. I have built all three JU-52 kits, and feel that this one is at least equal to the Heller kit, and certainly better than the old Airfix offering. It certainly has some problems, and you really have to read the instructions, but any modeler with average skills should have no problems with this one, and it really looks unusual on the model shelf next to my other JU-52’s. It is certainly worth getting, and with a little effort, you’ll have an excellent model of a very unusual aircraft. Highly recommended.

View of top port side from aft

View of top port side from forward

View of top starboard side from forward

Starboard side view from aft

Top view from nose
Previous Next