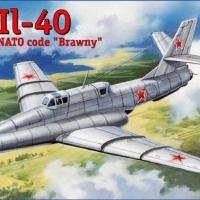 It’s hard to find words to describe this cross between the famous IL-2 Sturmovik and a T-34 tank. Like its WWII cousin, the IL 40 was born as a jet powered heavily armed and armored ground support aircraft. First flown on March 7, 1953, this beast carried 4000 pounds of armor plates protecting the crew and vital airframe components.

Weapons were carried internally and on external hard points. Additional firepower consisted of four 23 mm cannons mounted on the underside and another in a remotely aimed stinger protecting the rear quadrant. This kit represents the refined prototype as the original had air intakes at the wing roots and the cannons in the nose. As many other aircraft designers discovered, cannon gasses don’t mix with jet engines and as a result the guns on the IL 40 were moved back and the intakes moved as far forward as possible.

If you want to build that version you're in luck! Amodel has also produced a kit (#72158) of that version. The result is one of the more interesting looking designs developed behind the Iron Curtain in the 1950s. Only 7 Il 40s of all types were built before a change in Soviet battle strategy cancelled the need for what would have been an operational precursor of the Su-25 and the A-10.

The parts are contained on six light grey and one clear sprue. For a short run kit, everything looks nice with fine recessed panel lines and smooth surfaces. The canopy parts are a bit on the thick side but the surface is rough with very light outlines for the windows. The instructions have a parts layout, eleven construction steps and a paint guide on the backside. A small decal sheet rounds out what you get.

Get your files; sandpaper and scribing tools out cause your going to need them. Almost nothing fit together easily on this kit. Having built an Amodel product in the past. I spent a lot of time making joints disappear on this model. The fuselage halves sit on top of a two sectioned engine pod assembly. The worst joint was just in front of the cockpit where I spent a considerable amount of time making everything blend together.

The wings need thinning at the trailing edges. The mating surfaces have to be leveled before gluing. The wings and horizontal stabilizers have tabs/locator pins that help align those parts. I used the technique of liberally gluing the joints till the glue oozes from the joint. I find this reduces the amount filler I have to use. There are two crew positions with rudimentary seats and a stick, rudder pedals and instrument panel for the pilot. I just used what was in the kit as you really can’t see much through the clear parts. There are no color call outs for the crew compartments. I used that cool blue-green color the Soviets like even though this aircraft was a bit young for that color. Also note the instructions show Part 9 which is a bulkhead with the engine faces on it should not to be used. It’s for the other version of this kit because the intakes are at the wing roots. I installed it with no issues. After what seemed like an eternity, I was finally ready for paint.

Unless you’re doing a “what if,” scheme the only choice is natural metal with eight red stars. I used the tried and true Alclad Aluminum over a Tamiya rattle-can black base coat. I chose to leave the wing fences off and painted them separately after thinning them down. All that’s left then are the landing gear, pitot tubes and the antennas. Note: the box top illustration shows a different antenna arrangement than the instructions. The Internet photos I found match the box top so that’s what I did. The antenna wire was made from stretched sprue.

Despite the difficulties fitting the parts together this was an interesting project. In all fairness to Amodel, notes in the instructions and on the box clearly state that this kit is for advanced modelers only. Part fit aside, my only gripe would be the canopy parts which are very thick and poorly surfaced. I had a heck of a time trying to mask them out for paint. As far as I can tell, this is the only injected kit of this aircraft out there. You can make a nice model from this kit but you’ll have to work for it! Thanks to Amodel and IPMS for allowing me to build this kit and share it with you.