Panzerwaffe on the Battlefield 2 – Volume 21 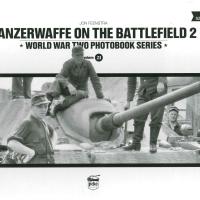 This landscaped, hardback book is written in both English and Hungarian, featuring select German armored vehicles throughout all theaters in World War II from 1939 to 1945. This is an incredible book with many previously unpublished photos of armored vehicles in depots, in the field and after combat. The next page reveals more surprises that the previous.

First and foremost, this book is written in Hungarian, and this language is shown first, followed by the English translation (and a great job by the editor, by the way; this is not a case of stereo instructions printed in one language and translated into another that doesn’t have words for stereo equipment). The author sets up the book with the following introductory paragraph, “In the strictest sense of the term, “Panzerwaffe” means tank or armour weapon. For the Wehrmacht (German armed forces), the Panzerwaffe was that part of the Heer (army) that consisted of armoured formations.”

The introduction continues to explain the development of German armored vehicles, forces and formations, and the types (Panzertruppen, Schutzen and Panzer Grenadier, Aufklarung, Panzer-Abwehr (Panzer Jaeger), Artillerie, and Flak units) in a concise, easy to comprehend format. The book then does a fantastic deep dive into photographs ranging from training, maintenance, before the battle and after the battle photographs. The book follows the progression of the Panzerwaffe from Panzers I and II, Panzer 38(T)s, through the panzers used at the end of the war. Also interesting is that the book follows the chronological progress of the war from Poland, France, Africa, Russia and NW Europe. If you are looking for glorified death, this is not your book; the photos are incredibly crisp and focus on the machines and their crews.

Each page has a plethora of inspiration for modelers with German armored forces, scenery and battle damage. The photographs place the reader in the pages feeling the cold, heat, the desolation, the despair, the joy and jubilance of not knowing the future. The book is a great reference for weathering as there are somewhat clean tanks parked next to muddy, abused vehicles. The post battle photos are amazing, and modelers can really let their imagination loose with extra detailing.

I cannot recommend this book enough for modelers of German armor. For those curious on an overview of the Panzerwaffe, this is also a good book. The only problem I have with this book is that I know must find the other 20 volumes of this series, then do a deep dive into my stash to find the perfect next model to build.