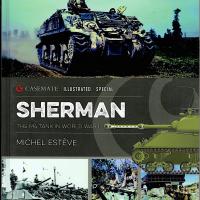 This awesome book Includes a vast amount of information with a very complete description of the Sherman tanks from the early M4s through the M4A6. The book is profusely illustrated with black & white and color photographs, color illustrations, charts, and diagrams. Modelers, historians, and those interested in tanks in general will find this book to be an invaluable enjoyable resource. The text is informative and easy to read, and the illustrations are beautifully done.

Sherman, the M4 tank in World War II, is an excellent reference for Sherman aficionados and modelers alike. The black & white photographs are sharp, very clear, and the color illustrations are very informative. This book is a handy reference for identifying the various Sherman types and variants. The book includes detail photos, in-action photos, and current photos of surviving Sherman tanks.

At 240 pages, Estève’s Book is obviously not as comprehensive as Honeycutt’s almost 600-page book. However, the color illustrations and photographs in Estève’s Book are much clearer and easier to understand than those in Honeycutt’s book. Estève’s book should provide more than enough information for all but the most detail conscious modeler or Sherman buff.

Sherman, the M4 tank in World War II is an excellent reference packed with information and highly descriptive illustrations and should be in every Sherman modeler’s library.

Many thanks to Casemate for producing this excellent book and providing the review sample to IPMS.