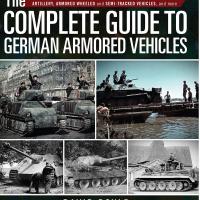 Given the massive interest surrounding the Nazi armed forces during World War 2, it isn’t surprising that publishers want to produce books that cover the entirety of the military vehicles used by the Germans, in one volume, at an affordable price. And for a reader interested in this topic, it might be very useful to have a handy guide to said vehicles all in one volume. Over the years, there have been a number of such tomes published. I myself have one from 1969 titled “German Tanks of World War II: The Complete Illustrated History of German Armored Fighting Vehicles 1926-1945” edited by Peter Chamberlain and Chris Ellis. However, to do it right, is surely a daunting challenge to any author? And what, exactly, is “doing it right”?

From my perspective, doing it right would involve providing a brief history of each vehicle, along with a few well-chosen, well rendered photos showing as much detail as possible. If the vehicle in question was one that saw series production, such as say the Panzer IV, then I would appreciate knowing the major defining characteristics of each variant. I would also like to see a handy, easy to read table showing important specs on each of the vehicles described by the text and photos: weight, LxWxH, main and secondary armament, engine type, engine displacement, number of vehicles produced, dates for production runs etc.

This book by author David Doyle is divided into 11 chapters, and is 322 pages in length. The pages measure 10 x 8 inches and the paper is what I would describe as semi-gloss. There are hundreds of all black and white photos spread through its 300+ pages, and they range in size from 3x2 inches to 6x4 inches. Each vehicle covered is described by a written text together with photos, the photos themselves having written captions. A breakdown of the book goes like this:

The chapters vary widely in length, with Chapter 5 on Flammpanzers being 6 pages long, while Chapter 1 on tanks is 93 pages, and Chapter 7 on Self-Propelled Artillery is 19 pages in length.

The way each vehicle is covered is not consistent throughout the book. The most important tank, numerically, in the German arsenal during WW2 was the Panzer IV. It served on every front the Germans fought on, and was utilized by German forces as well as the forces of their allies such as Bulgaria and Hungary. There were 9 different variants of the Panzer IV, and it was the only German tank that was produced throughout the entirety of the war. Over 8,500 were built. So perhaps devoting 20.5 pages to the Panzer IV makes perfect sense. But flip further into the book, and one discovers 4.5 pages devoted to the SturmTiger, of which only 18 were produced? Yet the Sturmgeschutz III “only” receives 13 pages, despite having 7 different sub variants being produced, and 10,000+ individual vehicles. In fact, weirdly, there are more pages devoted to the SturmTiger than to the actual Tiger 1 tank!!

The book is also inconsistent in the information it provides for each vehicle. Sometimes the reader is told the number of vehicles produced of a given type, many other times this number is a secret. The photos are all over the place in both size, and clarity. Sometimes the photo is of a vehicle way off in the distance, so very little useful detail can be seen. And the photos often duplicate themselves for no purpose than I can tell. Of the five photos of the Elefant/Ferdinand in the book, the two photos on page 139 show each vehicle facing in exactly the same direction, except one photo shows the vehicle twice the size as the other. So what is the purpose of the half size photo? There is also no apparent consistent method for choosing the photos. Sometimes all the photos of a vehicle are clearly those taken by the Allies from some sort of evaluation report. There are no people in the photos, so one doesn’t actually know how large or small the vehicle is. Other times the photos are fully populated with people, obviously “in action” on the field of battle. As mentioned earlier, some photos are large, others are tiny. To my mind, fewer photos of a vehicle in a larger sized format offers more than lots of photos in a small format?

In the written text the author has a tendency to repeat himself, as if the book was written in sections, at different times, with the writer having forgotten what he had said earlier. Not only this, but two identical paragraphs about a vehicle will appear in the same section, for example in the Panther tank section. The fourth paragraph on page 71 is identical to the last paragraph on pages 77/78. The paragraph on the Panther II is also duplicated within the covers of the book. There are also typographical errors such as in one instance the Tiger I is described as the “Panzer IV Tiger”, rather than the “Panzer VI Tiger”. Such mistakes make for a disjointed read at times.

So, what is my overall impression of this book? Well, firstly, I would say if you are already well versed with German WW2 vehicles, and have a fairly extensive library on individual vehicles, and then there is nothing new in this book for you. There are few if any new insights into any of the vehicles covered, and from what I can see few if any previously unpublished photos that add anything to the dialogue on such vehicles. And from a modeling point of view, I don’t think this book offers very much at all, since so many of the photos are in my opinion too small in format to offer useful details for a modeler to study. There are certainly no scale plans and no color and marking profiles.

On the other hand, despite the structural errors I have pointed out, such as repeating the same paragraph on certain vehicles, the book does contain a lot of information for the novice pupil of German WW2 military vehicles. If one wants a single volume to reach for when it comes to such vehicles, at the price, this tome isn’t a bad deal. I can recommend it to anyone who is just starting out learning about the myriad numbers of vehicles utilized by the German Armed Forces in World War Two. My thanks to David Doyle for providing IPMS USA with an opportunity to review this book for its members.