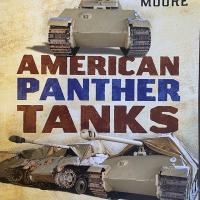 American Panther Tanks: An Examination of the Five Surviving Panzer V Tanks Including the Rare Panther II might be considered as a strange title for a book; however, there are five Second World War examples in the US. It is believed that fourteen captured Panzer V Panther tanks were shipped to the United States after hostilities ended in 1945. Most were cut-up and scrapped after being used for testing and target practice on live firing ranges. The Panzer V Ausf.A Panther tank at the American Heritage Museum, Hudson, Massachusetts, near Boston, has been completely restored to an extremely high standard. The other four Panther tanks are at Fort Benning, Columbus, Georgia, under the care of the U.S. Army Armor and Cavalry Collection (U.S. AACC). They are awaiting their turn to be restored. The first four chapters briefly cover the development and production of the Panzer V Panther tank from the first version, the Ausf.D, to the second version, the Ausf.A. This is followed by the final production version, the Ausf.G, using photographs from other surviving Panther tanks around the world.

This is the first book and reference guide to photographically examine all five surviving Panther tanks in the U.S. Three chapters cover the design and development of the Panzer V Panther tank. When production of two Panther II hulls were ordered, only one prototype was built. The only surviving example of the Panzer II tank hull is examined in comprehensive detail. This is an excellent reference book for military modelers, historians and tank wargamers (Hell Let Loose, War Thunder, World of Tanks) interested in the iconic Panther with authentic camouflage livery.

This book is a fascinating examination of the five surviving Panther tanks in the United States, including the rare Panther II. The introduction includes the very interesting history of how the Panther came into existence, why the Ausf. “D” was the first version, not the Ausf “A”, and background on the only surviving Panther II hull in existence. The first three chapters discuss, in great detail, the specifications of the Panther II, Ausf. D & G including numbers produced. The close-up detail photos of each tank, in their respective chapters, have to be seen to be believed. They’re amazing. Any modeler of the Panther tank wouldn’t have to look any further than this book to achieve historically correct results. Reading this book, one realizes the depth of research completed by the author, and that he is clearly an absolute expert on this subject. Additionally, the captions next to each photo is a Masterclass in the Panther’s development, specifications, and changes from variant.

This book (reference manual) is highly recommended. My thanks and gratitude to Casemate Publishers and IPMS/USA for the review sample.