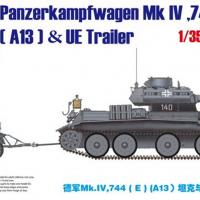 This kit is a representation of the British Army’s A13 Cruiser Tank that was captured by the Germans and placed in service for the Russian Campaign.

This is a multimedia kit but the use of the Photo-Etch is required, there are no optional plastic parts. Please be aware that some of the plastic parts are very, very small and will take a steady hand to get them off of the sprue without damage. And when they are off the sprue these minuscule parts do their very best to hide or get lost in the carpet or even on the work table.

Step 1 This step builds the chassis and includes the springs for the axels.

Step 2 This step builds the wheels drive sprocket and idler wheels, my particular sample had a short shot on some of the wheels. Bronco was very quick to replace those with a replacement sprue.

Step 3 This adds the front transmission housing along with some photo etched on the front of the tank.

step 4 This adds the tracks to the wheels, the instructions say that 119 are required for each side. I normally leave these off of the vehicle until towards the end of the build so I can paint the tracks off model. You will need to leave the drive sprocket and idler wheel loose so the tracks can be fitted to the vehicle.

Step 5 This step adds the top of the hull and the rear plate. There were no problems with this step.

Step 6 This step adds the hatches and engine covers and in the front a bow plate armor.

Step 6 This step adds the rear engine plate it asked for a photo etched nameplate to be added I suggest you wait till very late in the build as this will be easily broken off.

Step 8 This step builds the toolboxes that go on both sides, they require some photo etched to be attached on both places you can go ahead and can install these as a part of this step. You also build up the exhaust mufflers and the covers that keep you from stepping on the mufflers. You may want to hold off on the shields until after you have built the exhaust mufflers and painted them and the basic body. You will want to do that so the mufflers show the rust thru the covers.

Step 9 This is where you add the mufflers and the shields to the hull along with the front headlight and the Notek light. I suggest you wait on the until after the build is almost finished.

Step 10 This step builds the air intake manifolds this photo etched parts PA17 and PA18 are very difficult to bend and you may just want to do it with a lead strap.

Step 11 This builds up the air intake to the back plate and some odds and ends and photo etched on screens. You may want to add these little parts later but now it’s okay if you are careful.

Step 12 This builds the wooden ditching apparatus. I held off and did not add until very late in the in the build, it is that the 2 brackets Ma9 would be very easily broken off during the rest of the build.

Step 13 Now things get a little more difficult this step builds the front armor over the driver section and it is very difficult to get it to sit down onto the hull that all occurs in step 14 but now you have to build it and I found it very difficult to get it installed. Step 13 also builds all the Jerry cans you need to watch which ones are which because some are water (Wasser) and some are gasoline and when you paint these items the white cross goes on the Water cans.

Step 14 This step adds that front armor plate from step 13 and it will take a lot of pushing and shoving to get it to install properly. This step also installs some lights on both of the front fenders, these are very delicate and will probably be broken off in a heartbeat so you may want to wait on those until you’re almost finished with the build.

Step 15 and 16 This step adds some extra tracks on the top of the fenders and also adds the Jerry cans that are held in with a photo etched bracket. This photo etch is very difficult to get stick, I super glued it numerous times and it just didn’t hold, you may need to use epoxy to get the photo etched bracket to hold.

Step 17 This starts the building of the turret. You have an option to have the hatches open or closed and there’s not much interior, so unless you fill it with a figure you may want to leave it closed. The instructions ask you to build a stretch sprue antenna and you have a choice of bases for the antenna.

Step 19 This finishes the turret by adding the gun that you assembled in step 18 and the turret hatch plus some odds and ends sitting on the top, along with the antenna in the back, which is a very delicate operation with the multiple photo etched parts. Once assembled it looks very good.

Step 20 This step adds the spaced armor that the Germans added to the outside of the A13 cruiser tank. You may want to paint the turret before you add the spaced armor because once you get the armor on it is very difficult paint on the inside, yet you can still see the inside plates.

Step 21 Builds the Jerry can racks that go outside the spaced armor, it has some photo etch and it looks okay but it may not be worthwhile for the effort.

Step 22 This has some photo etched that goes in the front and should be placed now. However, the instructions also have some photo etch wing nuts on the engine cover. This is a good time to put them if you are start painting.

Steps 23 through 30 build the UE trailer assembly. Step 3 builds the axles and springs, the wheels in the brackets they sit in come on next. In step 24 you add the axles and springs to the main body and then you attach the wheels to that you may want paint all this before you do that so that you can get to the wheels and get the tire color correct first. In step 25 you add the front and back plates to the travel box along with some braces. Step 26 I ran into a big problem; it appears that I was one track link short for the set on both sides. I counted the number of links on the sprue and a count of the number of links I had used in this build and they were equal. I was still one link short, I contacted a fellow modeler and he gave me some of his track links and I was able to finish the tracks. I don’t know if this was my fault or I lost a piece or what! But be very careful when you’re building the tracks that you keep track of all the pieces and that you don’t cut off the connecting points too close to the piece, keep the cut close to the sprue. In step 27 you build the fenders and you add the photo etched pieces. In step 28 the rest of the trailer hitch is finished. In step 29 you build the fuel box and assemble it to the trailer. In step 30 you actually attach the trailer to the tank itself.

The color charts show the reference numbers for Tamiya, Humbrol, Mr. Hobby, and Mr. Color. The paint schemes and associated decals are as follows:

The decals are for the vehicle and are limited to the 2 paint schemes. They have no manufacturer's name other than Bronco, so I have to assume that Bronco produced them themselves. They appear to be in register but they are stiff. The decals on the vehicle are on flat surfaces and did not pose any problems

The build is at an Intermediate/Advanced level with very good detail and some exceptionally small plastic parts along with intricate and small photo etched parts. The molding is crisp with no flash and minimal mold lines.

The conclusion for this kit is it’s a very nice kit and goes together fairly well. However, there are some difficult points, and there are some very tiny pieces that will require a lot of patients on your part but it is a good model of a basically obscure early war of a British A 13 tank captured and used in German service. I can recommend this to any World War II German armor builder and maybe even a British Fan as well.

I want to thank Bronco Models for providing the sample and IPMS USA for the review space.