Panzer III On The Battlefield 2 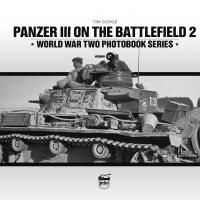 If you are a student of WW2 German armored vehicles, or enjoy modeling subjects such as the German Panzer III and Panzer IV, then the name Tom Cockle should be very familiar to you. Mr. Cockle is a prolific author on such subjects, and has written or co-written books for Osprey Publishing, Concord Publications, Squadron Signal Publications as well as European publisher Peko Publishing. Mr. Cockle is also a frequent commentator on such matters on military vehicle model websites such as Missing-lynx.com. The book under discussion today is the 18thvolume in this wonderful series by Peko Publishing. I have 8 of the titles in the series so far, and plan on picking up others as my reference budget allows.

Volume 18 follows the tried and tested format of the previous titles. The book starts with a two page written historical piece which begins “There were many variants of the Pz.Kpfw. III designed and produced to fulfill a specific role in the German Army in World War II.” This written piece goes on to describe various Panzer III artillery spotting tanks (Panzerbeobachtungswagen III), followed by a discussion on the production of amphibious or Tauch-Panzer IIIs. While there is nothing on the cover or in the title of this book that indicates these are the subjects to be covered, I thought well, okay, guess these are the vehicles we are going to learn about today via the photos and captions. However, as I leafed through the pages of this book, it wasn’t until page 67 that I came across the first photo of a Tauchpanzer III. The first Panzerbeobachtungswagen III, a Pz.Bef.Wg. III Ausf. D1 doesn’t appear until page 81.

The book consists of the 2-page written “Introduction”, followed by 102 pages of black and white period photos. The pages measure 11” by 8.25”. Each page is limited to one photo, plus a written descriptive caption. The photos measure 10” by 6.25”, thus providing excellent detail for the most part. Most of the photos are well reproduced, with the occasional slightly blurred one. The captions are excellent, pointing out key details on the vehicle concerned so the viewer can pinpoint that the tank is a Panzer III Ausf. B, or Ausf. F etc.

The first vehicle photo in the book, Page 8, shows a Panzer III Ausf. B, and the caption points out two hinged circular brake access hatches which were specific to the Ausf. B. THIS is the kind of information I as a modeler LOVE to get in a caption. From Page 8 through to Page 67 shows Panzer III Ausf B’s through Ausf N’s, describing the various features of each mark as the series progressed. Starting on Page 67 we are introduced to the Panzer Ausf F/Tauchpanzer. Photos of the Tauchpanzer then occupy the pages up until Page 80, which depicts a Tauchpanzer III Ausf. H. Page 81 then transitions to the first of the Panzerbeobachtungswagen III’s, with a Pz. Bef. Wg. III Ausf. D1, culminating on Page 108 with a Pz. Beob. Wg III, converted from a Pz III Ausf G. The final two pages of the book are of Flamm Panzer III’s.

For anyone interested in German tanks of WW2, and the Panzer III in particular, this is a gem of a book. Well-chosen photos, most of which are reproduced to a high standard, and described with intelligently written captions by someone who knows his Panzer IIIs. This book comes HIGHLY recommended. My thanks to Casemate Publishers for providing IPMS USA with the opportunity to review this excellent tome.