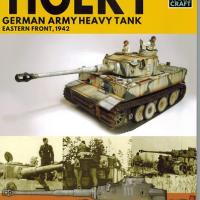 This is the 30th offering of this series and the 7th in the detailing of the Tiger I and Tiger II .

The book is divided in 8 section/chapters, and include an Introduction, The Eastern Front- August, 1942- March, The Tiger Units, Camouflage and Markings, Model Showcase, Modelling Products, Technical Details and Product Contact Details.

The book focuses on the first vehicles that left the production line and that went into battle during late 1942 and early 1943. There is a detailed description of the use of the vehicles from 1 August, 1942 through 31 March, 1943. This is followed by a table stating the number of tanks in each Tank Unit in August, 1942.

Next, we go into the reporting of each unit that used the Tiger I during the time previously mentioned. There are several tables indicating the table of operations for units 501 and 503, as well as the allocation of vehicles received, lost, on hand and operational.

In the center of the book, you will find 32 pages dedicated to the color/camouflage of 20 vehicles, as well as the description showing details of 4 models ranging from 1/35 through 1/72 scale kits.

This is the section that I found most interesting as it shows how to improve your Tiger I. The last page of the book is full of information in regard to the different companies that made products for improving the kit. If you want to upgrade/improve your Tiger I, I feel this is the book for you.

Thanks to Casemate Publishers and Penn and Sword for allowing me to review this offering.