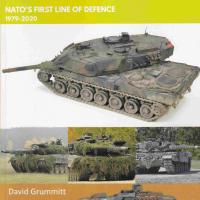 Tankcraft is series of books from Pen and Sword covering specific vehicles in a concise format and also covering the models associated with that specific vehicle also. This latest volume covers the Leopard 2 and notes that it’s NATO’s first line of defense and covers the years 1979-2020.

The table of contents gives a good look at the way the book is laid out:

The beginning two chapters cover the development of the Leopard 2 and its origins and WWII technology. The next five chapters continue with specifics for each variant from 2A0 to 2A7. Each level shows the improvements made and why they were needed. This culminates with the 2A7 version.

The next brief section covers export use to Austria and Canada. The next section is nine color plates showing multiple camouflage and markings and most impressively, they contain actual pictures of the tanks involved which is nice to see side by side with the artwork.

The next two sections are where this book shines for modelers. In the Build section, there are six separate builds: the first build is a Leopard 2NL by David Grummitt of the Meng kit. This conversion uses Legend production kit to convert plus resin additions. The next build by Imad Bouantoun is Meng Leopard 2A4FIN in a spectacular camouflage scheme with scratch building. Next is Chris Jerrett with Tamiya’s Leopard 2A5 with replacement tracks from Bronco. Chris Jerrett does a second build of the Stridsvagen 122 with Bronco tracks again and a lot of scratch building on the turret. A mix of Tamiya and Hobby Boss builds the Leopard 1A6M CAN and is done by Lester Plaskitt with slat armor. Lastly, David Grummitt builds a Leopard 2A6 from Border Models. All of these builds are excellent and have in process photos and explanations.

The next section covers what is available to modelers for both kits, aftermarket and decals for the Leopard 2. This is 10 pages of what kit are available as well as resin and photoetch. The decal section contains a list of markings. Also, each part has pictures of the kit, decals and aftermarket plus a well written narrative.

It a little weird but the Foreign Service section returns after the modeling. This continues with discussions of Finland, Denmark, The Netherlands, Norway, Poland, Portugal, Sweden, Spain, Switzerland, Turkey and Greece. The book closes with a review of the Leopard in combat in Bosnia, Syria and Afghanistan and a section for further reading.

The one thing that impresses about this book is the amount of material crammed into 64 pages. It is well illustrated and for fans of the Leopard, it is a must especially for the modeling section. Highly recommended.

My thanks to Pen and Sword and Casemate Publishers for the opportunity to review this book.