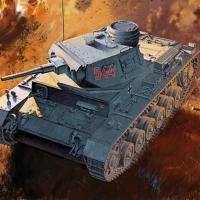 Quick summary, this is not Dragon’s first Panzer III kit released but it might be one of their finest. Upon opening the box, you will find the following items, all 650 parts (about 70 of which are not used):

There are a few variations to decide upon for he build. After looking over the instructions a few times, I decided to start building a vehicle from 2nd Panzer Division, Russia 1941. The kit has different cupolas to choose from and the 2nd Panzer Division had late model cupolas which I prefer over the early cupolas used by the 16th Panzer Division.

The build is straightforward and as easy as it gets for a Dragon kit. This is not a shake-and-bake kit with its large number of parts, small parts and separate track links. It will require some modeling skills. I will list the steps that require attention and correcting.

Once the build was complete, I used Tamiya German gray as a basecoat and used Tamiya white and black mixed in to do some post shading. the tracks were painted Vallejo track color and Mig pigments were used to simulate rust and wear.

Overall, this build was nice and relaxing and produced a great looking model. I would like to thank Dragon Models USA for the review kit and IPMS/USA for the chance to build it. And thanks to those of you reading this!