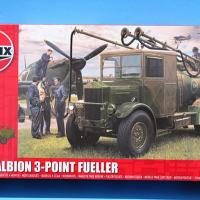 By the outbreak of WWII over 400 Albion 3-Point Fuellers were in use with the RAF both in Europe and the Far and Middle East. Many went to France with the RAF in 1940, and suffered a similar fate to the vehicles of the British Army, being abandoned on the run back to Dunkirk.

Those that remained gave sterling service during the Battle of Britain, helping to quickly refuel fighters in between sorties, their three refueling hoses drastically cutting down the time needed.

The kit is produced by Airfix, a well-known maker of scale model kits. The kit arrives in a very colorful box with artwork of an Albion refueling a Hurricane. There are some test shot photos displayed on the side of the box showing detail of the cab and pump.

The kit consists of approximately 113 parts and comes on four grey sprues, and one clear. The parts are nicely molded, with no flash, fine panel lines, and small sprue gates. The 12 page instruction sheets show the suggested assembly through 55 steps starting with the chassis assembly and progressing through cab, pump and pump housing, gas tank, and final assembly. The decals are produced by Cartograf and printed with in registry with no silvering.

The kit fits together very nicely! This is a nice kit for only being a skill level 2 kit. I had no problems with gluing together any of the main assemblies and did not have to use any filler at all. The only seam I found that needed attention was on the chassis frame and was easily addressed. There is a nicely detailed engine that is suitable for display. I actually built and painted all of the assemblies separately and then put it all together. The only delicate parts are the hose tubes for the fuelling arms. I accidently broke one into many pieces removing it from the sprue. So in the photos one hose appears shorter than the rest. I plan to replace it with an after market hose. Decals are provided for the cab instrumentation and for the pump gages, which is a nice finishing touch. The front wheels can be posed in any direction, which adds realism to the kit.

The decal sheet is very basic with only single unit decal option. The decals laid down very nicely even over a flat sheen surface.

Overall the kit is a joy to build and builds into a nice Albion 3 Point Fueller truck. The fine panel lines and the detail are exceptional for a kit of this scale. This kit would make a nice diorama with one of the new Airfix Spitfires or Hurricanes.

My thanks to Airfix and IPMS USA for the opportunity to build this kit. I look forward to building more of the new Airfix kits in the future.