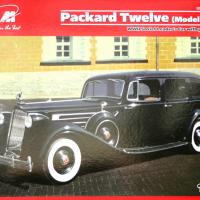 The kit represents Prime Minister Josef Stalin’s personal Packard V-12. I found it difficult to get information on how this car was acquired. It was rumored that we (the US) gave him dies to make the car, but it’s unknown how true that is. I was able to get a few pictures, but my computer was giving me a fit, trying to get on a Russian site (not ICM’s), so I stopped.

The V-12 engine was a very durable engine. Packard had modified these to adapt them to marine use in our PT boats. Rolls-Royce licensed Packard to build the V-12 framed Merlin, which powered many British and Canadian aircraft, including our own P-51 Mustang, for better performance at high altitude than the Allison engine.

I like this kit, and in the hands of a modeler with greater ability than mine, this car could really sing. There are some problems that need to be addressed, though.

Parts are all included within re-sealable bags, helping to contain strays. Even the clear sprue for the kit’s windows was in its own bag, a great feature. All the plastic except the windows is a light tan in color. The kit has great detail with 191 parts, 38 in the chassis alone. During construction, I used Model Master liquid cement to tack the pieces in place for alignment, then used Plastruct Plastic Weld to secure them. The kit’s plastic itself is a little unusual, as has been mentioned by another model builder. In my opinion, it’s like a “Soap Stone” material. It’s hard and very brittle, which could affect small-diameter parts. I broke one but welded it back together with no problem with the Plastruct liquid. Builder beware.

This was the first time I’ve assembled a vehicle’s body from two separate halves. Again, I used Plastruct Plastic Weld for this, with liberal application of filler and primer to give the top a flowing roof line.

Building the engine uncovered a few problems. On the engine crank pulley, part A20, the tab that goes into the block was about 2mm short, making the vertical alignment off. I also had trouble with the generator (today, an alternator) toeing-in. I couldn’t make it line up right to fit the tab. Because these two things were giving me a problem, I added a piece of Evergreen plastic to the lower crank pulley A20. I then modified the generator to fit on the front of the engine block, shortened it, and lined it up. This may be my misunderstanding of the instructions, but it should be addressed.

I found another item on the engine part A63, lower hose to radiator connection. I noticed that on much of the assembly of this kit, ICM designed square pegs to fit into square holes for alignment, which is a good feature. Although part A63 has the square peg, it is important to assemble part A54 to A68 first in instruction #10. This is the fan shroud and radiator sections. Use it as a guide over the engine fan. A63 may need to favor to the right and down to line up with its connection to the radiator. In painting, I used the paint scheme colors that were recommended. Although I got a little carried away with the paint, I used either brushes or spray cans – I’m, not an airbrush user.

The tires are built up in the form of rings. I haven’t worked with this before. Interesting, but I would have preferred standard rubber tires with white wall inserts.

Another problem I found was with the decals. The decal film used is, in my opinion, too thick and inflexible. I used both Micro Sol and Solvaset – barely affected it. When the decals first separated from the paper, they stayed very stiff and did not want to wrap around curves like other decals do. For example, they would not conform to the bullet head-shape of the hub cap. The decals for the dash instruments went on so-so, but they were being applied to a flat surface.

The next area that was a problem, I should have caught during assembly. The front seat back part, B8, is about 1 mm too wide on either side, causing a bulge when parts A57 and A58 are installed. That causes a problem when attaching the door assemblies to the body – they don’t fit flush on the bottom. So I removed the side pieces, A57 and 58, although they are not the problem. After that, the door assemblies fit flush as they should. If I had elected to cut the doors and leave them all open, it may not have been an issue, but the illustration and instructions shows the door fitting as one unit on each side.

The remainder of the assembly process went smoothly. I did make a minor modification, since I wanted to “butterfly” the hood opening to look like the cars of that era. It was my experiment with the kit – nothing major, just a little masking tape.

I want to thank ICM for keeping WWII alive with the manufacturing of this model and others in their line. And I particularly want to thank Squadron for their distribution of these models and for supplying this kit for review (and for the picture of the B25 on their T-shirts taking off from the USS Hornet, 18 April 1942, again keeping WWII alive. In today’s history books, not much is written about this very important era!). Finally, I want to thank the IPMS staff for the opportunity to do this review. I enjoyed both the troubleshooting and the build.

Figures in the paint shop