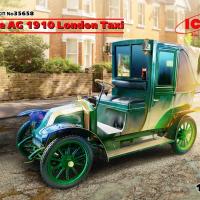 In 1905, Renault produced a relatively inexpensive two-cylinder vehicle which in the next few years was so popular that it became the primary taxi vehicle in both France and England. The French taxis, of course, would go on to achieve historical prominence during World War One transporting French troops rapidly to the front lines in what would become known as the “Miracle of the Marne.”

ICM’s Type AG 1910 London Taxi is a variant of this same vehicle, with modifications that would be typical for a British market. It shares most of the same molds as ICM’s earlier French Taxi but includes a separate sprue for the alterations, for a total of 6 sprues plus vinyl tires. Like the French version, this kit features a very nice representation of the miniscule two-cylinder engine as well as nicely detailed chassis and landaulet body.

The kit begins with the assembly of the chassis frame, and you’ll want to be sure that the cross-brace (Part A42) has the notches facing toward the front of the frame. This slipped by me during my build and I had to wrestle the part off and around fairly late in assembly – something I wouldn’t recommend doing. The next step involves the attachment of the fenders, and you are asked to drill a hole on one fender for one of the British-specific parts – a tubular assembly whose function initially baffled me. After much deliberation it dawned on me that this was an umbrella holder! Very British indeed.

At this point you begin assembly of the body, and once again have to drill some holes, this time to mount the “a-ooga” horn. The horn itself comes on two parts and really should have the bell drilled out, although this is a tricky operation due to its shape. Frankly, my Dremel and I lost this battle, although it’s not particularly visible on the finished model.

After this is the assembly of the body to the chassis, and there are some very fine fender supports (Parts D5) which insert onto the chassis and then UNDER the fenders. Then follows the engine assembly, which makes for a charming little machine with one caution – the location of the exhaust pipe to the engine is obvious, but where the other end goes under the body is not. It should actually feed through the small opening between the outside of the chassis and the fender assembly. I left mine off until late in the build, and there were a few contortions involved before I figured this all out, using the location of the muffler assembly as a guide.

One thing I should probably mention was that there appeared to be a lot more flash for a model of this age than I was expecting – even to the clear sprue. I’m not sure of the cause of this, but it was easily remedied through the usual modeling methods. Just be aware that some flash if not cleaned properly will definitely interfere with the build.

On another note, if you’re going to assemble this with either of the landaulet doors open, you may want to replace the clear window with some thin acetate, the thickness of the clear plastic being otherwise quite obvious. Also, the doors lack any interior detail whatsoever so you may want to scratch a door handle as well if you go this route.

For the purposes of painting, it’s best to assemble the entire landaulet top canopy as a single piece rather than adding it onto the body in parts as suggested by the instructions. This canopy assembly was the only place in the entire built where I was obliged to use a smidge of putty to blend things together. The fit is good enough that the canopy can be added after assembly and painting of the body.

Painting is a relatively easy affair as the body is all one color with the chassis itself being black. A good metallic brass color can be hard to manage, and I actually had to hand paint it with some chrome silver added to allow a somewhat more realistic look. There are decals included both for the taxi meter and license plates, although the kit does not actually provide the flat plates for these latter decals to go on. I surprised myself a bit by simply carefully cutting them off the decal sheet, backing and all, and gluing them dry onto the model.

I think what delighted me most about this kit was the relatively fast assembly for such a delicate structure. I had the whole thing together ready for painting in less than a day, and the painting completed the next day. Not bad at all for such a jewel of a vehicle.

Frankly, this was just a fun model to build. I love the final look and if ICM keeps up with its habit of releasing figures to go with their vehicles, with any luck we’ll have some passengers and coachmen from this period available soon to create that quintessential foggy London street scene. I can hardly wait! All in all, a lovely, well-made kit that creates a charming little gem of a model. Heartily recommended. Jolly good show!

My thanks to ICM for the creation of this charmer, and to IPMS/USA for the chance to take a shot at it. Be safe, friends, and happy modeling!