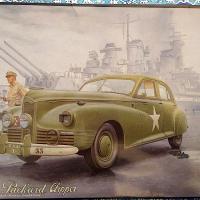 Background from the website: "In 1941, Packard introduced a new model of car - the Packard Clipper. It was created by the talented designer Howard Darrin, who had previously collaborated with this company and significantly influenced the appearance of all Packards in the second half of the 1930s. The new car had a powerful 125 hp engine with a displacement of 4.7 liters, was wider than its predecessors, and had an extremely elegant design. By the end of the year, Packard had produced 16,000 such cars, but the US entry into World War II completely changed subsequent plans. The military high command issued extraordinary production orders for its requirements, and many purely civilian manufacturers, including Packard, were repurposed to produce military equipment.

Packard won a special role in this big game - to produce one of the best engines of its time, the British Rolls Royce Merlin. After receiving all the documentation, it was named the Packard Merlin and was produced in the following years in extremely large quantities and installed in various types of aircraft, including one of the best fighters of its time, the P-51 Mustang.

Most of the Packard Clippers were purchased by the military, and it was widely used during the war years as personal transportation for senior officers. At least two of the cars became very famous because they were used by military heroes of the time - General Dwight Eisenhower and General Douglas McArthur."

This is a finely detailed 35th scale US Army senior staff automobile that can be built into a faithful replica if you carefully cut and fit the parts. It's not a civilian car though could be built as such with a few changes. Maybe a civilian version will be in the works in time, possibly in 24th scale? The kit comes on 8 sprues including clear parts. You have the option of 1 of 3 cars: MacArthur's, Eisenhower's, and a museum car at the Ohio Classic Car Gallery. The plastic is on the soft side and the sprue gates are large, so it's best to cut each part off the tree with the gate intact. Then carefully cut each gate from the part. I learned the hard way: the right side front windshield frame was damaged and broken when I attempted to cleanly cut the gate from the part with hobby pliers. Thereafter, all parts were carefully cut. It's recommended to try different steps dry fitting, as the 8 page instructions don't provide an sub- assembly order.

I started with the 5 piece body, gluing the back halves first, the rear portion of each front fender next, and the front end last. The dashboard and trunk (can be positioned as open) were added and the 4 doors were each assembled and glued in place. You have the option of rear fender skirts, check pictures of the car you are building- Ike's car did not have the skirts, though they are very cool looking!

The interior received an airbrush coat of Testors Model Master (MM) Acryl Armor Sand and the raised details on the dash were dry brushed with silver paint (note: no dials on dash). The body exterior and hood were airbrushed with Testors (MM) Acryl Olive Drab. The front windshield has frosting, and Micro Mesh sanding and Novus polish failed to get this out completely. As an alternative, one can easily make new windows from clear plastic sheet, though in the interest of this review, I went with the kit parts. The instructions suggest the windows are inserted from the outside of the body, but going from the inside is easier. I left off the door windows as I like the open interior look better.

Though I paint brushed 2 coats of Future, the white star decals had a bit of silvering, possibly due to excessive decal carrier film.

I built car #2- the museum car, and added the remainder of the exterior details, with a scratch built antennae from a pin, since the kit part was damaged during the sprue removal. The interior pan came next and the front/rear seats and firewall were glued in. The top half was airbrushed armor sand, while the exterior was painted in olive drab.

I next glued the nicely detailed 21 piece engine, it was painted Alclad dark aluminum and Vallejo flat black per the instructions and set aside while the chassis frame was built up. Take your time with it, and dry fit. The 2 frames were glued together piece by piece starting with the front end with the stronger pieces (7C, 54C, 3C, 4C). Make certain to have the exhaust piece (51C) in place, when adding the cross section (1C, 2C) to the frame. From there the remainder of the chassis is simple. Next comes the front and rear suspension, again be sure to dry fit and consider which piece to glue first before starting. The wheels and tires are one piece styrene, not rubber/vinyl tires; you simply glue front and back halves. Unfortunately, I lost the tread when sanding the halves. After the wheels were glued to the wheel backs, I discovered that 1 of the rear tires was approx. 1/32" off the ground. To correct, I held the chassis unit above a pot of simmering water (not boiling!) and gently twisted it until the tire was back on the ground. The off-ground tire returned when I next glued the chassis to the interior pan, so be careful with the chassis and pan, test and retest prior to gluing!!

The final assembly was simple, the chassis/interior fits easily into the body. The completed car does look a bit high off the ground, I think it should sit lower. If you take your time, this kit will provide you with a very nice 41 US Army Packard, a car that has rarely been kitted if at all in styrene.

Thank you Roden for the sample and IPMS for the opportunity to review this kit.