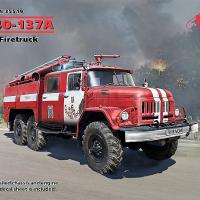 There is an old proverb, or maybe it's an English idiom, that states:” give credit where credit is due.”

It is thought that Samuel Adams might have been the first to coin the phrase. Giving credit where due applies to the Ukrainian company, ICM Holding. Having persevered a 'commie invasion' of Eastern Ukraine, packing up their entire manufacturing facility and moving it to the Western Ukraine they also seem to get the most from a particular model kit’s mold, in this instance the Soviet Military truck ZiL-131.

The original ICM kit of the ZiL-131 was released in 2014 and has been re-released and re-packaged with additional parts for an emergency and recovery vehicle, figures (both soldiers and drivers) and the subject of this review, the AC-40-137A Soviet Firetruck. True to form ICM holding has released several different sets of figures (clean-up crews from the Chernobyl disaster) to go along with this Soviet Firetruck. Not a company to miss an opportunity, they will soon have available a version of this kit with civilian fire fighters.

The kit consists of two hundred ninety five parts which include black vinyl tires, clear bits for windscreens and headlamps as well as a small decal sheet containing markings for four separate vehicles. Most, if not all, of those clear bits can be added after assembly and painting. Just leave the roof of the crew compartment off until the very end. All of the clear parts fell into place without the slightest difficulty.

The decal sheet provides the script applied to each vehicle, the distinctive white panels (upon which that script goes) common to the type will have to be painted separately. The assembly instructions do reference those white panels. There is photographic evidence that not all Soviet fire trucks have them. Otherwise, it'll be a masking, you will go.

The instruction booklet is well illustrated and has color call outs throughout referencing either Revell or Tamiya paints. Those instructions also clearly note several parts (probably associated with other variants of the basic chassis) that will go unused.

As with most truck models, construction begins with the chassis and its familiar parts. ICM Holding kit includes all the necessary bits for what builds up into a very detailed and complete chassis and drive train. Air tanks, power takeoffs, fuel tanks, running boards, axles with individual leaf springs, detailed suspension parts, drive shafts as well as an elaborate engine are all included.

There are some mold parting lines and fit issues (particularly with the engine and the power take off for the water pump) but nothing consequential. Some of the ejector pin marks (cab interior, especially) will be visible and you may wish to fill those before finishing up assembly, but most are hidden during construction. One area that you might find problematic is the connection of the power take-off shaft to the water pump. The universal joint on the shaft is way too large to fit through the access hole provided. One fix is too just make that hole larger. The other is too clip off the shaft part (#F32) and slip that part through the hole. All this for no additional charge. The detail-oriented may wish to add the plumbing and wiring (engine, brake lines, etc.) but that is all that is missing from 'what's in the box'.

When you get to Step 57 (of 146) you can begin with the compartment for the driver and fire fighters. Individual parts are provided for the brake and accelerator pedals as are the different shift levers. Interior side panels are separate pieces that have individual door handles and roll up window cranks. (Try explaining roll up windows to your grandchildren.) Other bits, for various accoutrement on the crew cab roof and requisite external features (clearance lamps, siren, etc.) are enclosed with the kit.

The body of the vehicle is next with bits for the side panels, rear panel details and the water pump. That pump area may seem a bit spartan to some and might benefit from some additional detail, to busy up the area, from your spares box. The lovely, engraved lines on the side panels of the body of the truck represent the storage bins. A crafty person could open those up but if you do you will definitely need to add any and all detail that would be behind those doors.

After adding some details (steps, lights, pump outlet, etc.) to the body of the fire truck it's on to assembling four hose canisters and a three-piece extension ladder as well as a single length ladder for the upper deck. Do exercise some caution when assembling the hose canisters (part #'s F18, F19, F20, F21, F26, F27, F28, F29). I did not and had some assembly problems later. In addition to those items there are a number of smaller parts (firefighting equipment, side mirrors, windshield wipers, forward facing water nozzle, etc.) that get added to finish up the build.

Having finished with the building part, it's on to the painting part. It would seem that all Soviet fire trucks are painted overall red. One popular answer to why Russian fire trucks are red goes something like this: “Because they have eight wheels and four people on them, and four plus eight makes twelve, and there are twelve inches in a foot, and one foot is a ruler, and Queen Elizabeth was a ruler, and Queen Elizabeth was also a ship, and the ship sailed the seas, and there were fish in the seas, and fish have fins, and the Finns fought the Russians, and the Russians are red, and fire trucks are always “Russian" around, so that's why fire trucks are red!" No extra charge for that either....

The markings provided are for four fire trucks that were assigned, in the early 2000's, to Sergiev Posad and Moscow (Russia) Vinnytsia and one from Kiev (Ukraine). You could showcase the Kiev vehicle next to an advertisement for a chicken restaurant and see if anyone gets the joke. I chose a different scheme offering a gently used, single owner vehicle assigned to the Duchy of Grand Fenwick. The markings that I did use went on beautifully.

The AC-40- 137A Soviet fire truck from ICM Holding is a cracking kit. The model goes together well without major fit issues although some of the smaller bits may present a challenge for the novice builder. As noted earlier, the only assembly issues I had were of my own making.

For those who have built multi-wheeled vehicles, one of the banes of those kits is getting all the road wheels/tires to sit properly. There is almost always at least one wheel/tire that is just a bit off. This Soviet firetruck kit from ICM Holding is the first I've modeled where all six road wheels/tires make proper contact with the 'pavement'. Kudos to ICM!

The level of molded detail is first rate and is what has become expected from ICM Holding. This model has ample opportunities (side storage bins, rear water pump area, crew cab, etc.) for the detailer to go to town. ICM Holding already has some nice crew sets  to make that task that much easier.

My thanks to ICM Holding and IPMS/USA for the review model.