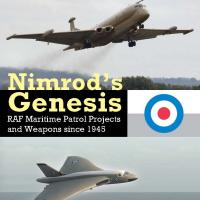 Chris Gibson’s latest book on British aviation projects examines the post-war genesis of the RAF's maritime patrol aircraft. Starting with the British affection for its flying boats of 1945, Chris Gibson chronicles the switchback path that led to the Shackleton and ultimately the Nimrod. As a bonus for underwater target fans, Chris Gibson provides intrepid commentary on the aerial systems developed to counter the threat from Soviet submarines.

To seek and destroy Soviet submarines, Shackletons and Nimrods carried many advanced weapons and sensors, but also played a role in saving lives at sea. Then, after forty years' service, the Nimrods were withdrawn without replacement after one of the most expensive procurement disasters.

Following in the path of Chris Gibson’s previous books, this tome presents hundreds of illustrations, photographs, and artwork. Chris must have really enjoyed the research as there are many projects depicted I was previously unaware of.

The first chapter, “Voenno-morskoj flot SSSR and the Threat from Below”, presents the raison d'etre for British maritime patrol. The emerging threat of Soviet submarine and missile development had a profound impact on the development of the British response. Chris Gibson traces the Soviet efforts to have a blue water navy on par with the US and Britain and how the Soviet navy responded to the West’s ASW developments.

In the “Hunter/Killer: Sensors and Weapons for Aircraft” chapter, Chris Gibson focuses on the tools for submarine location, including radar, MAD, infrared, sonar, and sniffers. Of course once you figure out how to locate them, you have to be able to destroy them, and Chris Gibson delineates the development of rockets, depth charges, torpedoes, and of course, nuclear depth bombs. These are depicted not only with photos but with illustrations on how they worked and the strategies for their use.

Chris Gibson’s next chapter is on the swan song of the flying boats: Old Men and Airships: The Last Flying Boats. The request for tenders for R.2/48 crated responses from Shorts, Vickers Supermarine, and Saro. Chris Gibson wades deep into the technical proposals, their unique features (i.e., radome flipping) and the political morass that led to the demise of the flying boats. As a treat, Chris Gibson spends four pages on the development of the Napier Nomad engine and its fuel, “Diesoleum”.

“The Kipper Fleet: Short and Medium Range MR” reviews the Admiralty’s increasing concerns for coastal protection, particularly form mines laid by submarines. The sudden need was so urgent that Air Commodore Harold Satterly wished to look at any and all aircraft, including civilian, for use in the short and medium range role. Vickers proposed several modified Varsity and Viscount platforms. Even the Bristol Freighter with its fixed landing gear was considered. Lockheed’s twin engine Neptune was utilized, but it was only briefly utilized until replaced with the Avro Shackleton.

Chris Gibson dives into the development of the Avro Shackleton in “Avro’s Bespoke Maritime Landplane”. An outgrowth of the WW2 era Lancaster, the Shackleton would be plagued by its high noise level which led to crew fatigue. Trying to get around the cabin noise from the contra props provided lots of proposals from Avro, but no real solutions. Chris Gibson spends the next eight pages on the hunt for a ‘Super Shackleton” as both Avro and Bristol (with their modified, yet to fly, Britannia).

The continuing escalation of the Soviet submarine threat forced NATO to issue NATO Basic Military Requirement Number 2 (NBMR.2) to replace the Lockheed Neptune. Chris Gibson portrays the European environment and the proposals to meet the requirement from English Electric, Armstrong Whitworth, Avro, Bristol, Fairey, Saro, and Dornier in Chapter 6: “Sideshows: NATO and the Trinity”. The NBMR.2 result would be the Breguet Atlantic, which the RAF wanted no part of. Instead, the RAF became enamored with the Trinity project, an all-in-one proposal that was a compromise in all three roles. Some very interesting proposals were prepared with Vickers 1.15 Mach variable geometry design and Handley Page’s Mach 2.2 laminar flow delta. The end result of the Trinity would become the Vickers VC10, although it never would see its maritime role.

Chapter seven, “Following Trinity: OR.350”, describes the first real attempt to replace the Avro Shackleton with the OR.350 specification in 1960. OR.350 drew design proposals from nearly all British aircraft companies and many foreign companies. My personal favorite was Avro’s proposal to adapt the Vulcan to the maritime role. In the end, politics got in the way of a choice and the Air Staff cancelled OR.350 in 1963.

Chris Gibson describes the further refinement of what the Air staff wanted with chapter eight: “Plus Ça Change: OR.357”. The new tender request OR.357 was a bit more specific than OR.350 and thus got proposals that were a bit less fantasy. The illustrations depicting this evolution, both in three-views along with details on engine proposals and structural proposals are truly fascinating. Political priorities impacted any decision on OR.357 though, and OR.381 was created in the face of the rapidly deteriorating Shackletons.

Chapter nine, “Not So Interim MR: OR.381”, continues the political machinations to finally arrive at a selection. The Air Staff in 1963 was stuck with a terrible choice. Either upgrade the Shackleton or select an interim proposal. Pushing their decision towards the interim proposal was the push to order the Breguet Atlantic, to the horror of the British. The fact that OR.381 had been written to favour the Atlantic just galled the Air Staff all the more. Sir Arnold Hall picked up the ball and became the driving force to transform the De Havilland Comet 4C into a feasible platform. This initially was known as the Maritime Comet, but after a drawn out naming discussion, became the Nimrod. The battle lines were drawn, now all the Air Marshalls had to do was destroy the competition’s proposals before time ran out. Chris Gibson adroitly describes not only the political spectrum that forced the decision, but provides details on the alternatives to OR.381

The search for the replacement of the Nimrod began almost immediately, since it originally was only to be an interim platform, nevertheless, the Nimrod soldiered on. Chris Gibson’s chapter ten, “Replacing the Maritime Comet”, explores the incessant attempts to replace the interim Nimrod prior to its retirement with no replacement. One of the more interesting projects presented by Chris Gibson was converting Nimrod AEW.3 airframes into an anti-ship role. The AEW radar would be replaced with six Sea Eagle ASMs.

I was extremely impressed with the coverage and quality of this publication. It’s not often you get a history of an aircraft chock full of all its competitors, let alone all the political machinations that went into making decisions that would impact a program’s capability. Chris Gibson was able to weave in a tremendous amount of data and still manage to provide a compelling story.