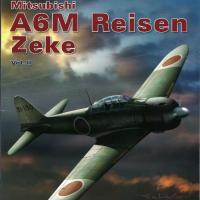 Based in Central Europe Kagero Publishing House is the biggest publisher and exporter of English-written publications about military history, releasing nearly 60 titles every year. Kagero was founded in 1995, and began by delivering military titles in Polish. Their success led Kagero to start releasing books in English in 1998. Authors from Poland, Canada, USA, Australia and Great Britain, who were invited to write for Kagero, gave a beginning to a new range of products, which have put them in a position of one of the most recognized publishers on the market. Kagero has released more than 550 publications. Kagero is managed by Damian Majsak and his wife Joanna.

Kagero’s Mitsubishi A6M Reisen Zero, Volume 2, is one of the latest in their Monographs series. This edition is in their standard 8.25” x 11.75” format softbound publication that is 96 pages (excluding covers). I counted 140 black and white photographs of which the majority are from WWII. Zbigniew Kolacha contributes 22 color illustrations of A6M2-N Rufes, A6M2 Reisens, and A6M3 Reisens. Anirudh Rao provides eight complete 1/48 line drawings of the A6M2-N Rufes, and four complete line drawings of the A6M2N Rufe in 1/72 scale. The 1/48 scale drawings are accompanied by eleven section views and an additional eleven 1/48 drawings focused on the main and wing tip floats.

Dariusz Paduch follows up on his early Mitsubishi A6M Reisen Zeke Volume 1 that was published in March 2021 with Volume 2. Volume 1 focused on the A6M’s development and the early variants while Volume 2 addresses the A6M in service up to the spring of 1944 with the invasion of Saipan. I have found no announcements, but it would be reasonable to expect a third volume on the service of the A6M Reisen through the end of WWII. Page nine (see photos) addresses the A6M trainers. Notably, the trainees flew in the front with an open cockpit while the instructor sat behind underneath an extended canopy. The Reisen’s air dominance is discussed in the air battle descriptions over Port Darwin and Broome early in 1942 (Page 27 photo). Japan’s aerial dominance continued over Guadalcanal where the 253rd Kokutai claimed 101 air-to-air victories at a cost of 30 aircrews (Page 59). Throughout, Dariusz Paduch has pursued research to verify claims on both sides that lead to some interesting results. One could easily say that exaggerations were the norm, although there were exceptions. The sections include:

One section I found most fascinating was a description of how the Japanese were able to get a range of some 2,000 km out of the Reisen, excerpted from Saburo Sakai’s memoirs. Saburo Sakai acknowledges that the normal flight time of the A6M was six to seven hours on a normal sortie, but by cruising at 115 knots at the absolute minimum in speed and power, they were able to extend their range. Of course this meant that pilots might be in the cockpit for ten to twelve hours. A second topic addressed the 252nd Kokutai unit’s commander, Lt. Fukuda, who had his unit start using quick head on attacks from altitude against B-24s in the Marshall Islands. This tactic downed some 50 Liberators in two months.

I consider the Kagero Monographs series an essential reference for model building. You get period photographs, great line drawings in scale, and beautiful color illustrations. While most of the color illustrations are as side profiles, but some include upper and lower surface illustrations. This being the seventy-third volume, they have managed to cover quite a few aircraft. If you have any of their previous books in the Monographs series, you know how great a value this book is. Highly Recommended!