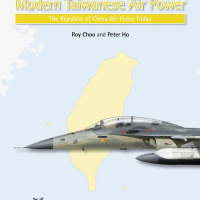 Did you know that the Republic of China Air Force (RoCAF) is one of the oldest air forces in the world? It marked its 100th anniversary on November 29, 2020. It may also be the only air force that has physically moved, from the Chinese mainland to the island now known as Taiwan in 1949, after the Chinese civil war. The RoCAF has a special place in American history, when a volunteer group of US pilots fought Japanese forces in the Second World War in P-40Bs marked with RoC markings. This unit is, of course, the famous Flying Tigers. The RoC also flew many dangerous reconnaissance missions in the late 60’s, over China to gather intelligence regarding the latter’s early nuclear testing. The RoCAF also flew numerous support missions against Viet Cong forces during the Vietnam War, with high losses. The many combat missions this tiny nation has undertaken is largely unknown due to the secretive nature of its military.

Modern Taiwanese Air Power: The Republic of China Air Force Today is a collaborative effort from Roy Choo and Peter Ho, both highly knowledgeable on Taiwanese military aviation. Roy Choo is a defense journalist and photographer based in Australia, and Peter Ho is a Taiwanese aviation photographer and chief editor of the Formosa Military Image Press. Both of them are considered subject matter experts on the RoCAF (Republic of China Air Force), and in this book they share their knowledge and thoughts on this small but capable air force.

As the title suggests, the book focuses on the Republic of China’s modern air force, scope, challenges and future. However, the book does provide a brief introduction into the origins of the RoCAF, and is an absolute must-read for aviation enthusiasts as the RoCAF had operated quite an interesting variety of military aircraft.

Appendix I lists the colorful patches used by the various units of the RoCAF. This section would be quite useful for anyone trying to ensure that the correct unit markings are applied to their models.

It is difficult to describe in a few sentences how important the RoC is to the stability of the Asia-Pacific region, and how strategically, economically and politically important this tiny island is to its neighbor across the straits. The second and third chapter in this book succinctly describes the challenges the nation and the RoCAF faces, and will continue to face as the balance of power continues to shift in the PRC’s favor over the last twenty years due to the latter’s growing economic and political strength on the world stage.

The fourth and fifth chapters will appeal most to modelers, as it discusses with some detail the RoCAF’s current and future inventory, as well as the continual upgrades the fleet is forced to maintain due to its difficulty in obtaining new aircraft. The book also has a fairly detailed analysis of the RoCAF’s F-16V program, which the RoCAF confusingly refers to both the recently purchased new-build Block 70s and also its upgraded A/B models. These F-16s form the backbone of the RoCAF and will allow to keep pace technologically with the Chinese People’s Air Force. Of course, there is also ample emphasis on the Indigenous Defense Fighter, or AIDC F-CK-1 Ching-Kuo fighter, with beautiful photos of the aircraft’s unique lines and color schemes.

As usual with Harpia Publishing, the book is printed on quality glossy paper, with clear text and sharp images and diagrams. This book is not a detailed study of aircraft types, but there is enough information for a modeler interested in particular topic to get started on his or own additional research. Anyone interested in modeling this unique air force would be hard pressed to find any better compilation of information, and will not find a better source of inspiration on the topic within easy reach.

As a part of the Chinese diaspora, the topic of the RoC and the PRC is viewed with a feeling of trepidation. In general, most Chinese feel conflicted as we would like to have both sides reunited, but are not keen on the most likely way this would result. Whatever happens in this flashpoint will have major repercussions in the worldwide, as both of these nations are inextricably tied to the world economies. In a way, the RoC’s duty to defend the nation also inadvertently results in a duty to keep some stability to the fragile world economy. The pressure to maintain an air force that would make it extremely painful for Beijing to make good on its promise to reclaim the island by any means necessary is incredibly high. Choo and Ho’s book illustrates just how much the cards are stacked against the RoC’s favor in this deadly staring contest.

Two manufacturers have subjects modeling the Taiwanese Air Force out of the box: AFV Club (www.hobbyfan.com.tw)and Freedom Model Kits (www.freedommks.com). AFV has an excellent U-2 in 1/48, and both AFV Club and Freedom Model Kits have produced the indigenous F-CK-1 fighter. Both are excellent kits in their own rights, though the consensus among modelers is that the AFV kit is easier to put together, while the Freedom Model product has better stores options and decals. Freedom Models also has the two-seater variant as well. Annoyingly, neither company has seen fit to release a 1/72 kit of the F-CK-1, so the modeler is left to find the very rare and expensive Moxing Studio resin kit or slightly less rare but ghastly Kiddyland kit.

As the RoCAF has used various US aircraft, you can also pick up decals from Best Fong (www.bestfong.com). Best Fong as decals for practically every aircraft the RoCAF has flown.

For a primer on the complicated mess that is Taiwan/China/Republic of China/People’s Republic of China, check out a quick history of the RoC at https://en.wikipedia.org/wiki/Taiwan