Windsock Centenary Special: The Last Flight of the L32 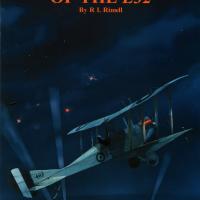 Ray Rimell is releasing a limited edition volume (1,000 individually numbered and signed copies) of the ‘true story of the ‘Billericay Zeppelin’. A companion volume on ‘The Last Flight of the L31’ is being released simultaneously. The cover features a painting by Robert Karr depicting 2/Lt. Frederick Sowrey taking off from Suttons Farm in his RAF Be2c 4112 on the night of September 23, 1916. Ronny Bar contributes a color side profile of Sowrey’s RAF Be2c. I counted 55 photographs (including eight in colour) and a 1/48 scale drawings of a night fighting BE2c (RAF1a engine).

This book, along with ‘The Last Flight of the L31’, is the long awaited follow-up to Ray Rimell’s ‘The Last Flight of the L48’ released back in 2006. This volume addresses the crash of L32 near Billericay on September 23, 2016. Ray Rimell opens up with a general introduction to the use of Zeppelins in World War I. Part Two introduces Oberleutnant zur See Werner Peterson, and follows Peterson’s command of L7 to his final voyage as the commander of the L32. The aerial engagement where 2/Lt. Frederick Sowrey shot down L32 is well presented as well as the wide swath of the remains of L32. A two and a half page biography of 2/Lt. Frederick Sowrey is presented at the end. I especially appreciate Ray Rimell’s use of eye witness accounts to enhance the storyline.

This is an intriguing story that I am glad that Ray Rimell has finally completed and released. If you have any interest in WWI aviation, I wouldn’t wait on getting this book as, again, it is a numbered and autographed edition that is limited to a thousand copies.