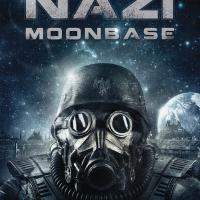 The year is 1947, Operation High Jump is under way and will become a disaster. Admiral Byrd says it was due to weather and conditions in the Antarctic, but was it really? Could an attack by Nazi UFO craft have damaged and destroyed the High Jump fleet and aircraft? Did this cause the Nazi’s to then leave for an even more remote location to regroup and plan their ultimate revenge against the allies? That location…. The Moon!

Osprey Publishing brings us the new Osprey Adventures book “Nazi Moonbase”, written by Graeme Davis and illustrated by Darren Tan. This 80-page book gives an inside look at what the Nazi Moonbase is, what it’s made of, and how it got to be up there in the first place.

The book is broken down into chapters that delve into the beginnings of the Nazi space program to its present day status. Some of the chapters include

Each chapter has great illustrations and builds on the next. The early chapters discuss the beginnings of the Nazi space program, the infighting between the head of SS special projects and the head of the Nazi rocket program, then moving into the timeline of UFO development, Energy Weapon creation and the use of Vril energy, the ultimate power source. We also see who was behind the idea to head first to Antarctica after the fall of Germany and then ultimately the moon. The later chapters discuss heading to the moon, how the base was built, what different projects occur there and what the ultimate goal is for the Nazi’s to return as conquerors of the world. The final chapters discuss the Earth’s response to the base and how right now there might be a secret space program defending us from the most fervent ancestors of the Third Reich.

I highly recommend this book as it gives some great ideas for what if models and with the detailed illustrations give you great information for potential dioramas. So next time you look up at the moon just think someone might be looking right back at you….

A big thank you to Osprey Publishing for the book, and to IPMS for letting me review it.