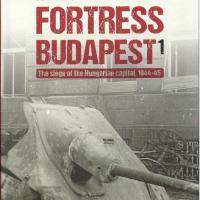 Although the idea itself was born earlier, the Hungarian Peko Publishing, was established in 2012. Even though this is quite a young company, it became popular and well known by the modeling community in a short period of time. The key to their success is that they own thousands of original photographs, most of which have not yet been published. PeKo Publishing Books are distributed in North America by Casemate Publications.

Kamen Nevenkin was born and lives in Sofia, Bulgaria. His interest in the Second World War dates back to his early childhood, but it was only in year 2000 when he decided to go professional. In the years that followed he devoted himself to hard work, mastering languages, studying and collecting a wealth of archival materials. The latter included several onsite visits to the military archive in Freiburg, Germany. The first result of all these efforts was a reference book dedicated to late-war German panzer divisions, "Fire Brigades". The book received excellent reviews all over the world and became an instant hit with the fans of military history. Over the past couple of years, Kamen Nevenkin has focused his research exclusively on the battles on the Eastern Front in 1944-1945. Despite the narrowing of the focus of his research, he remains faithful to the principles he had followed while writing "Fire Brigades", namely - working with archival documents, ignoring the myths imposed on the public for decades and bias-free approach to the themes he is researching. In his work, he is guided by the principle of the balanced approach and by his belief that since there are two sides in a battle, the viewpoints of both belligerents should be made known to the public. His language skills include English, Russian, German, as well as some other East European languages.

Kamen Nevenkin covers the 108-day Budapest Offensive operation, and specifically, the 50-day Siege of Budapest, a 50-day-long encirclement of the city by Soviet led forces. Encirclement of the city began the day after Christmas in 1944. Perhaps the bloodiest battle of the war ensued with thousands of military and civilian deaths. Stalin, eager to take Yugoslavia prior to the Yalta summit, pushed his generals to make quick work of Budapest. The first push into the city ended in failure on the prepared earthworks that halted the vaunted Soviet tanks. These rows of tank ditches were dubbed the ‘Attila Line’ and were quite effective, despite the Soviet command being fully aware of them. The second factor was the German and Magyar (Hungarian) defenders. The Russians respected the German army but was quite surprised by the Magyar’s ferocity on the battlefield. Soviet adjustments to improve cooperation amongst the Soviet generals, eventually carried the day for the Allies, but only after many tactical mistakes.

The arrival of an anti-aircraft regiment and a battalion of radar and searchlights in mid-January 1945 proved to be the turning point by effectively ending the German airlift to Budapest. Short on supplies, the German led defense literally ran for the hills before an unconditional surrender was agreed to on February 13, 1945.

Kamen Nevenkin goes into depth into what led to the Siege of Budapest, details about every unit involved by all combatants, the aviation, armored fighting vehicles, artillery, and the infantry equipment used. The conversion of Budapest into a fortress is detailed along with the city’s structure, including its suburbs. Combat operations are covered on nearly a daily basis.

This huge two volume tome is split into two parts. The first volume is 1,107 pages of pure text. All of the photographs, sketches, and maps are provided in the second volume. The cover photograph of Volume 1 depicts the wreck of a Jg.Pz. 38(t) Hetzer on Fö Street 81. The cover photograph of Volume 2 is a trackless Zrínyi II assault gun that belonged to First Lieutenant Tibor Rátz on Krisztina Boulevard. I counted 83 black and white maps with color highlights that were often accompanied by black and white photos of the buildings in the maps. There are also 31 black and white sketches, 26 with color highlighting. These maps and sketches depict the military movements in the city along with the battles for the strongholds. I also counted 729 black and white photographs. The Table of Contents includes the following sections (Please note, I have excluded subchapters that are dates due to their sheer quantity):

This tale has been told before, but not in depth like this. Kamen Nevenkin had access to newly declassified Soviet archives resulting in a strong Soviet point of view in conjunction with the German and Hungarian viewpoints. This certainly is not a quick read, but it is a fascinating one. I particularly enjoyed the multitude of first person accounts. The use of the stronghold photographs next to the maps and sketches give a rich perspective of what you are seeing in the photographs.

There are many first person accounts throughout the book. One that still sticks with me was the capture of the Budapest Opera House on January 16, 1945. The Opera House had been ordered to be spared if possible by the Soviet command, so artillery preparation was not utilized. Soldiers attacked and faced close combat that would break down into fierce hand-to-hand fighting. The Germans were forced to flee the Opera House followed by and exhausting search of the building to root out any other fascists. Lieutenant Colonel Aleksandr Zushmanovich was participating in the search when the crying of children was heard coming from the Opera House’s cellar. Running into the smoky basement Zushmanovich ran into the confusion of villagers. After reassuring the people several times in German, English, and French, a man came forward and said:

“I am Mihaly Szekely, an opera singer. These men and women are all performing artists or theatre workers. We have been living here, in the basement for more than two months now in the darkness without anything decent to eat, sometimes even without water. The Germans told us all the Soviet soldiers are savage beasts, who would rape women and murder us all…”

Zushmanovich ordered his soldiers to bring as much bread as they could and to establish a soup kitchen next to the Opera House. This was completed within 30-minutes. The villagers threw themselves at the bread and soup. One young man excitedly asked:

“Oh Sure they will. Will you do it, just for now? We, Soviet people, love music, songs, theatre.”

The Hungarians began consulting among themselves. Then a young woman stepped up to Zushmanovich.

“I am Julia Orosz, a singer. If we may, we’d like to put a concert on here, among the ruins. We have nothing with which to express our gratitude for your friendship and support.”

So amidst the gunfire sounding from outside the Opera House, folksongs rang out in the dim light inside the cold walls…The faces of the soldiers lit up with smiles…A sergeant handed over his submachine gun to his comrade, placed his cap on his head and started dancing…

Fortress Budapest is not a short read; it took me nearly two weeks. Still, Kamen Nevenkin has a great writing style and will keep you engaged. This two volume set has a high price point, but it is an incredible value for that price. I’m guessing this will sell very quickly, so get yours now while they are still at a reasonable price. You are getting 1,576 pages with over 700 photographs. If you have any interest in World War II, this is an incredible work.

My thanks to Casemate Publications, PeKo Publishing Kft., and IPMS/USA for the chance to review this great book.