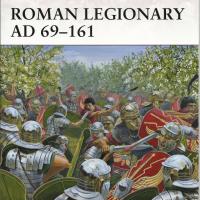 I am a big fan of Osprey books and I have quite a few in my collection and find they usually provide all the information needed to research a model. This book by Ross Cowan is no exception, and it is a follow-up book to his work Roman Legionary, 58 BC – AD69, which was published in 2003 by Osprey.

The Roman Legionary in the prime of the Empire was a fine tuned fighting machine. Kept in shape by constant labor, such as building forts and roads, their universal training meant that Legions from opposite ends of the empire could fight alongside each other seamlessly. Each man knew his place and function in the battle lines.

This is not to mean that the Romans were unbeatable. There are several cases of Legions (Approximately 5000 men at full strength) being destroyed or vanishing during our time period. Also, with rebellious leaders trying to seize control of the Empire, it was not uncommon for Legion to face Legion in battle.

The Roman army at this time was in transition, previously having been comprised mostly North Italians. Now there were more Spaniards, Africans, and Germans in the ranks, which were drawn to the Legions for the pay and the ultimate prize of Roman citizenship. Service was for 25 years, with recruits as young as 14 and as old as their 30’s. Perhaps only 45% ever reached retirement, earning a tidy pension or a plot of land.

The book is illustrated with black and white and color photographs of actual relics and surviving statuary, such as Trajan’s Column (which depicts scenes from the Dacian Wars AD 101-106), and gravestones, which give us an idea what the Legionary’s looked like in life. The excellent color plates by Sean O Brogain illustrate training, armor and weapons, and scenes of battle.

As the author points out, there is still much we do not know about ancient life, including details on the Roman Legions. However, this is an excellent reference for those interested in ancient cultures, particularly Rome’s Legions.

Thanks to Osprey and IPMS/USA for a great read!