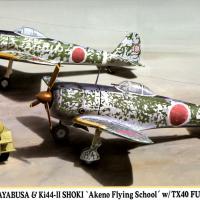 This Limited Edition kit from Hasegawa allows the modeler to produce an interesting diorama related to the Akeno Flying School as it existed in December of 1943. The Akeno Flying School was located on the island of Honshu, south of Nagoya and east of Osaka. It was called the Supreme Flight Training School for the Imperial Japanese Army. Lots of photos of aircraft that were used during training at Akeno include many fighters from the Ki-27 to the Ki-100. By December, 1943, Japan was seriously in need of new pilots. A series of conflicts with opponents across the area of operations had ground down the Japanese Army Air Service and replacements were desperately needed from schools like Akeno. This limited edition kit combo features two aircraft, a Nakajima Ki-43 Hayabusa and a Ki-44 Shoki, plus a TX40 Fuel Truck. Also included are several figures and a small four wheeled push cart.

The Ki-43 was the main fighter aircraft of the Imperial Japanese Army during the early years of WWII. It was very maneuverable but not too fast. It replaced the fixed gear Ki-27, Nate. Shortly after the specifications were issued for the Ki-43, the Japanese army concluded that they also needed a fighter that was faster and could climb much higher. This resulted in the Ki-44 which could intercept high-flying bombers and keep up with modern allied fighters.

The TX40 truck was produced by the Tokyo Automobile Corporation, a company that later became Isuzu. As the Sino-Japanese war began, the Japanese military ordered more support vehicles and a large new factory was built to produce the TX40. It was used by both the army and the navy for many different applications. The fuel tank usage included with this kit is typical. After the war, the allies allowed the TX40 and larger versions to continue to be produced and it had a major impact on postwar reconstruction.

The kit of the Nakajima Ki-43-II Hayabusa, named Oscar by the allies, has been around for many years. The kit features fine raised panel lines. The cockpit features a nice pilot seat and a simple instrument panel. The engine is basic, only including the front of the cylinders. This is not really a problem because the cowl covers most of the engine. Assembly of the kit is fairly simple and goes together well. Because of the age of the tooling, the modeler must pay attention to the edges of the wings and stabilizers to remove any minor flash. Some minor filler is required, particularly along the wing to fuselage joint on the bottom of the model.

The kit of the Nakajima Ki-44 Shoki, named Tojo by the allies, is a newer kit. It features nicely engraved panel lines and a well detailed fourteen-cylinder engine. The cockpit is very basic with just a nondescript box to represent the pilot seat. A nicely molded pilot figure is provided, however, and this fills up the area. The pilot must be installed before cementing the fuselage together. This kit is somewhat strange because many of the parts are attached to the sprues by a thick, square molded connection. When the parts are removed from the sprues with typical sprue cutters, a small square pin remains on the part joining area. With the fuselage, these must be removed and the areas sanded before the halves can fit together.

The one curious assembly problem with this kit is the engine/propeller/cowl assembly. Step one seems to indicate that the propeller is inserted through the cowl and the front part of the engine. Then a collet is glued to the propeller to hold it in place to the front of the engine while allowing it to spin. Next, the rear of the engine is glued in place. This would allow the assembly to be attached to the model in step 6. The problems with this is that the engine/propeller/cowl assembly is awkward to handle and difficult to paint. I glued the collet to the rear of the engine front half and then proceeded with the painting and assembly of the model. I slid the propeller into the engine collet as a last step. Other than this, the Ki-44 kit was easy to assemble with only minor filling required along the lower wing to fuselage joint.

The Fuel Truck kit is well detailed and easy to assemble. Assembly starts with the chassis and frame. This is followed by the axles. Care must be taken with all of the glue joints with these assemblies. Make sure that all of the joints are snug and lined up to ensure that the model sets correctly. Next, the seat and controls are glued to the chassis followed by the cab. The basic cab consists of three parts; the molding of the cab and hood, the cab rear panel and the windshield. The only problem with the assembly is that the seat seems to be a little too wide. When I assembled the cab to the chassis, the seat caused the cab rear panel seam to split. If I were building this model again, I would make the seat slightly narrower. The fuel tank assembled easily and looks impressive with all of the related pipes and nozzles. In addition to the fuel truck, the kit includes a small, four wheeled push cart with five barrels for cargo as well as three figures.

The kit instructions contain two different sets of markings for each of the airplanes. One of the schemes for the Ki-43 is overall natural metal. The other Ki-43 scheme as well as the two schemes for the Ki-44 consisted of a dark green blotchy pattern over natural metal. In many cases, this type of pattern is applied with a spray gun or is the result of a hastily applied outer coat peeling off. After checking my references, I found out that the camouflage effect on planes at the Akeno Flying school was achieved by simply daubing paint over the natural metal finish. Accordingly, I took my 20/0 liner brush and imagined that I was a two inch tall airman and started applying daubs of paint to the Ki-44, trying to generally follow the drawings.

The decal sheet was very extensive and included all of the national and unit markings, anti-glare panels for both aircraft, lots of small instructional markings and decals for the yellow wing leading edges. The leading edge decals were extensive and required the application of setting solution in certain areas to get them to set down. Take your time with this step. Also, care must be taken on the front of the anti-glare panel on the Ki-44 cowl.

This set goes together reasonably well and results in a nice looking diorama. It can be assembled by most modelers with minimum experience and is well recommended with the comments above. I would like to thank Hasegawa for bringing this set together and to IPMS for letting me add these models to my collection.