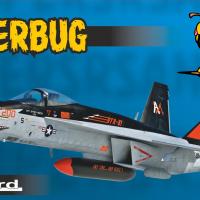 Eduard continues their upgrades to existing kits by giving the treatment to Hasegawa’s 1/48th scale F/A-18E and calling it Super Bug! Inside the box, you get the wonderful Hasegawa F/A-18E Sprues which are excellent with fine panel lines, no flash and good detail. To give it the updates treatment, Eduard adds Brassin details including a resin seat and tires; a colorized PE fret is added with parts to upgrade the cockpit and an Eduard Mask set for the kit. To top this off, a superb decal sheet is included with colorful markings for the following:

The decals were done by Furball Aero-Design and are superb and printed by Cartograf. A full set of stencils for one plane is also part of the sheet and has specific directions in the instructions. There are also decals for the weapons and various doors and ejection seat decals also.

For futther build details on Hasegawa’s kit, there are a couple IPMS reviews to check out:

With that, I want to concentrate on the Eduard enhancements. The photoetch set provides nineteen additional parts for the cockpit including upgrades to the sidewalls, stick, all instruemnt5 panels and screens as well as throttles. To round out the cockpit, a beautiful three piece resin seat is provided. It is light years better than the kit seat and includes photoetch belts and a full set of decals. Just cut it loose from the casting block, prime and paint and add the belts and it exceeds the kit set. The photoetch enhancements to the cockpit really make it stand out also and also includes mirrors for the canopy..

The remaining resin is the tires - two front and two rear. The rear tires are molded with separate hubs on one side and a mask it provided for all the tires to ease in painting. I did add one aftermarket set- Phase Hangers wonderful white intakes. Highly recommended for the E/F and EA-18G Hasegawa kits.

The kit includes only two weapons- two AIM-120 AMRAAM and two AIM-9X Sidewinders. Both are nicely detailed and even though the kit contains lots of drop tanks, the four remaining pylons look bare. I used AMK’s 1/48 set of GBU-16’s to get the busy look I wanted and added the belly drop tank so I could include the “Anytime..Any Place!” markings. To add the bombs, I had to cut the tabs off the wing pylons and drill new holes which were pretty simple. Eduard also lists a great selection of their Brassin weapons if you fancy something different.

Painting was per normal except I ran out of Xtracolor and used Vallejo Light and Dark Ghost Gray. They sprayed well but I had multiple touch ups as they wanted to wear off the leading edges (even clear coated) mostly due to handling. Selecting a scheme to do was easy- my son served aboard the USS Carl Vinson so the “Sunliners” of VFA-81 was the one. For this, the tails and the spine were masked and sprayed gloss black. The nose in front the wind screen has several zigzags in it and this was done with tape and trial and error. The belly tank was gloss black and then masked and shot with Italian red (car color) which matched the marking well.

The markings went on flawlessly and settled nicely with MicroSol system. While settling, I painted and added the exhausts (don’t forget the decals for them also). These were added to the kit. The remainder of the clear parts and pylons were added and the kit was done. I purposely did not weather much at all as pictures show this plane spotless.

So in summary - Eduard has taken the best kit currently out there of the F/A-18E, given the builder five superb marking options with Cartograf quality decals researched by Furball Aero-Design and upgraded the cockpit with PE and replaced the anemic kit seat. Total winner. This the third one I have built (plus a Growler) and they have all been great. Highly recommended and a limited edition so grab one fast before they are gone.

My thanks to Eduard for taking kits and adding the upgrade tight into the box to make a better build.

Right Side of Nose

Any Time Any Place - :Love it!

POW MIA inside of Tail