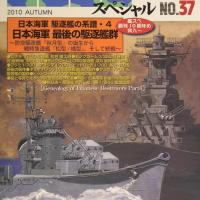 ModelArt special subject magazines are really softbound reference books on a particular subject. ModelArt Autumn 2010 No. 37 is entirely devoted to ships. No. 37 is the fourth part of detailed coverage of WW2 Imperial Japanese Navy (IJN) destroyers. This issue covers the Akizuki, Shimakaze, Matsu and Tachibana classes, all commissioned after the start of the Pacific War. Patrol boat conversions from 1940 onwards of the obsolescent Minekaze class are also covered, as are some new kits of modern warships. This issue is designed for modelers of IJN destroyers of these classes. Each class shows which kits and scales are available, and builds different ships in each class to show the variations and modifications during wartime use. Corrections to current kits to make accurate depictions are also shown. Best of all, line drawings show the exact, anatomically-correct look (fit) of particular ships at a particular date. This nice feature allows a modeler to portray almost any ship of each class very accurately. A special feature of these special feature references are three nice perks – 1) a page of 4 postcards of paintings depicting individual ships or battles; and 2) a color foldout of the full-size painting on the cover with a 1/350 scale line drawing of the Akizuki in 1942 on the reverse side; and 3) a B&W foldout of 1/350 scale line drawings (in this case of Matsu and Tachibana class ships).

Like other navies, the IJN added extra radars and antiaircraft guns to their surviving destroyers. The variations of each class are individualized to each ship, and with hard-to-find or questionable accuracy references available, there has been some issues with accuracy of the basic kits available for the later war IJN DD classes. This issue helps to solve a lot of problems with late-war IJN DD classes and is a must-have for anyone building these classes. At least at the present time, each class does have kits available, unlike the recent past.

The IJN was ahead of its time in constructing the Akizuki class as a large destroyer with main armament comprised of the new 3.9 inch (100mm) high velocity dual-purpose instead of the usual 5in (127mm) main armament. The 3.9in gun had excellent ballistic properties, and mounted in 4 twin weatherproof mounting, made the Akizukis well suited for carrier escorts as well as independent ship-to-ship actions. The IJN tried one more destroyer class as a super-destroyer with higher speed and an impressive torpedo armament of 15 tubes in three quintuple mounts – the Shimakaze class. This class was abandoned since the gestation period was too long and the new propulsion system was too complicated to allow for mass construction. When ready, Japan needed quantity, not quality of destroyers. Thus, the bare-bones, cheap and easy to build Matsu class was quickly designed and rushed to production, followed immediately by the even more simplified Tachibana class. These two classes were essentially destroyer escorts, built more for antisubmarine duty than fleet escort (by 1944, there was little fleet and virtually no carriers left to escort). The Minekaze class soldiered on as refitted patrol boats, suitable only for ancillary uses and as convoy escorts. Their numerous variants are nicely depicted in this issue.

The first 40 pages show off four large-scale Akizuki-class models in 1/200 and 1/350 scales. How to superdetail these kits is well illustrated, and useful for other scales. The next 15 pages are in B&W and show photos and line drawings of ships in each class along with some history (all in Japanese). Next is a two-pager on building the Tamiya 1/700 Shimakaze kit in 1944 fit and how to make a few modifications to accurize the kit. After just building four Shimakazes myself and spending many hours on references, I disagree with some of the details, but her first refit look is depicted accurately (additional single AA guns were added later). The Akizuki class is dealt with next, and has many pictures of the newer 1/700 Pitroad/Skywave models in early (1942) and later (1944+) visages. While the models are detailed, railings are left off (presumably on purpose). The relatively newer 1/700 molds of Akizuki class DDs by Aoshima are constructed next, followed by another separate section on the old 1/700 kits by Fujimi. Twelve pages of detailed photos and drawings of Akizuki class DDs follows the build pictures. This section is a treasure trove of IJN DD enthusiasts. After the B&W foldout, the 1/700 Matsu class kits from Tamiya are shown, including how to modify those ships converted into Kaiten human torpedo carriers. The 1/700 Pitroad Tachibana class is shown next. After a few pages of ads, the New Kit section contains the Skywave 1/700 JMSDF DDH181 Hyuga helicopter carrier kit build with photoetch details. The new 1/350 kit of the modern-era HMS Illustrious Royal Navy aircraft carrier follows, although I could not make out which company produced the kit. An eight-page section on a turn-of-the-century Naval Review shows the early 1900s look of the IJN in photos and Japanese text. Finally, a six-page section shows the variations of Minekaze class destroyers from first commissioning in the 1920s to final wartime guises by building the Skywave kits and some photos.

Special editions like No. 37 are larger than the standard 7x10 inches size of monthly Moderl Art magzines, and are close to 8x11 inches. As usual, printing and reproduction quality are excellent. Model Art text is entirely Japanese, and about half the photos of models are in color.

This issue is very highly recommended if you want to know everything about the later destroyer classes of the WW2 Imperial Japanese Navy, and how to build anatomically-accurate models of these later classes. This issue fills a large gap of knowledge on appearances of late-war IJN destroyers that is hard to find elsewhere. There is also some extra information on modern amphib kits.