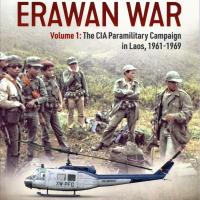 “The Erawan War, The CIA Paramilitary Campaign in Laos, 1961-1969” is volume one of a two volume set. The second volume covers the years 1969 through 1974. The book starts out by setting the stage in 1960 where Laos was a neutral buffer zone between communist and western nations. With a near bloodless coup in Laos, the need of an intervention by the CIA to aid rebels was needed. This book covers the timeline and details of the CIA in Laos for most of the Vietnam conflict. Participants or groups are listed in the text and in an abbreviations section which include the anti-Communist “Royalist Armed Forces” (FAR), Peoples Army of Vietnam (PAVN), Central Intelligence Agency (CIA) and “Air America”.

Throughout the book, maps are included showing military regions and other relevant locations including neighboring nations. Along with maps and actual photographs, there are sections showing color profiles of aircraft and numerous insignias (patches) involved.

From a historical standpoint or a modeling standpoint, this book will be a valuable asset in a lesser known or less publicized portion of the Vietnam conflict. I would like to thank Casemates and IPMS/USA for this book to review.