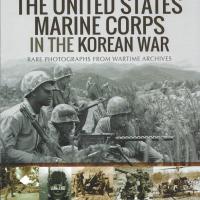 This edition in the “Images of War” series offers an overview of the 1st Marine Division operations during the Korean War. The book provides a good description of how the Marines were integrated into missions under the overall command of the US Eighth Army and X Corps under theatre commander Army Gen. Douglas MacArthur (and later, Gen. Matthew Ridgway).

The limited text is arranged chronologically in five chapters:

The author does a good job of setting the scene for US military involvement in Korea, with the initial scramble to establish a blocking force of US troops from the depleted Army units (demobilized at the end of WW II) garrisoning Japan, and the establishment of the 1st Provisional Marine Brigade (built around the 5th Marine Regiment, the only available Marine unit at or near full strength) hurriedly sent to the crumbling UN front as a “fire brigade” to stop enemy breakthroughs around Pusan. Later chapters describe the well known amphibious landing at Inchon spearheaded by a revitalized 1st Marine Division (also demobilized after WW II), the subsequent recapture of Seoul and the drive north beyond the 38th parallel, and the redeployment of the 1st Division in a misguided X Corps effort to drive across the northern Korean peninsula from the east coast and running headlong into eight divisions of Chinese “volunteers” near the Chosin Reservoir. The final chapters describe less well known aspects of the war with the 1st Division again redeploying to western and central Korea to shore up faltering Eight Army lines in the final stalemated years of 1952 and ’53.

The vast bulk of information is provided by the multitude of photographs and the detailed information that comes with the photo captions. This volume offers a good cross section of images showing the combined arms aspect of the Marines, with a generous supply of photos illustrating the various Marine AFVs, artillery and heavy infantry support weapons used in Korea, much of it leftover from WW II. There are also numerous images of Marine airpower, from close air support F4U Corsairs to the utility and troop carrying helicopters just coming into use with Marines. An interesting sidebar in the text describes the battles between the 5th Air Force and the 1st Marine Air Wing for control of Marine air assets (an integral part of Marine Corps combat doctrine little understood by the US Air Force at the time. Interestingly, this conflict would be repeated 15 years later in Vietnam).

For the modeler, this book provides a wealth of visual information for anyone wishing to depict the uniforms and equipment used by the Marines in Korea. The extreme variations in weather conditions and typography experienced by the US troops during the war are amply illustrated here. This book provides a ready reference for figure, AFV, or diorama modelers as well as good reading for anyone looking for a concise understanding of the complicated back and forth nature of the “Forgotten War”.

Thanks to IPMS and Casemate Publishers for providing this highly interesting volume for review.