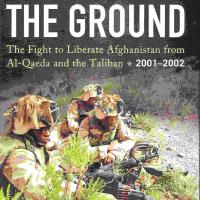 Zenith Press has published and excellent read with Boots on the Ground. The book covers the build-up and start of the war in Afghanistan during 2001-2002. The book starts with coverage of the Soviet involvement prior to their invasion, including their poisoning of the Afghani President and his subsequent execution, as well as coverage of the Soviet invasion and their loss of 15,000 troops and thousands of vehicles. There are great explanations of the Mujahedeen philosophy of "Death by a Thousand Cuts" where, in one year, the Mujahedeen conducted 5,236 attacks on the Soviets, one small attack at a time. There are great descriptions and pictures of the weapons used, from Stinger missiles to the Hind helicopter. This background history continues up through 9/11 and the decisions to get into Afghanistan.

The remainder of the book is broken into two parts, Northern and Southern Operations, and includes chapters based on specific missions, Task Forces, and targets. There are excellent color pictures of the weapons and people involved. One chapter deals with the Tora Bora and the pursuit of Usama Bin Laden into the Spin Ghar Mountains. There are great pictures of the mountains and people involved, as well as descriptions of the bombing of the mountains and the work and cost of doing business with the local tribes.

The book concludes with a summary of the results of Operation Anaconda, followed by a well done time line of the entire process. The book has details of all the assassinations, successes, and failures of the process and covers them all well. It makes for a great read and details things I did not know about the fight. The book is definitely recommended. My thanks to Zenith Press and IPMS/USA for the chance to review it.