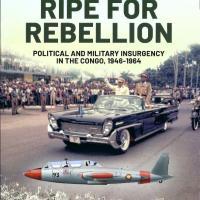 Helion produces books on many aspects of Military History from the Late Medieval period through to the present day. Helion was established in 1996, and since then they have published almost 1,200 books, with 100 or more new titles coming out every year. The 'Africa@War' series covers African military history since 1945.

Stephen Edward Rookes is originally from Exeter in the UK, Dr. Stephen Rookes is a French writer and academic who earned his PhD from the University of Toulouse Jean-Jaurès, France. He specializes in the history of Cuban exiles and takes a particular interest in the CIA's covert operations in Central America and in Africa. This is his third instalment for Helion’s @War series.

Helion’s latest book in the Africa @ War series is a square back soft cover includes 80 gloss paper pages. This is the first of two volumes covering the “Congo Crisis’. The cover features a color photograph of President Joseph Kasa-Vubu in a white uniform in a parade of Congo’s independence from Belgium. The cover color side-view by Tom Cooper is of the last of three CM.170 Magisters of the Avikat that bedeviled the UN; in this case as it appeared at Kolwezi airport in November 1961. I counted one color picture (front cover) and 85 black and white photographs and drawings. There are also eight aviation color side profiles by Tom Cooper (Page 40v for example); one helicopter side profile by Luca Canossa; six color illustrations of uniforms by Anderson Subtil; and seven color side AFV profiles by David Bocquelet, along with six black and white maps, one color map, and three tables.

The Democratic Republic of Congo, named after the Congo River, is the largest country in Sub-Saharan Africa by area. As Europe was scrambling for resources via colonization, King Leopold II of Belgium claimed the Congo, acquiring “rights” to the Congo at the 1885 Berlin Conference. Over 250 ethnic groups make up the area that become the Belgian protectorate, where the Bantu peoples are the majority. Even though there are over 200 languages and dialect, most can speak French, and it is the “official” language.

Stephen Rookes kicks off this volume in 1482 with the adventures of Portuguese explorer, Diego Cao and leads up to the Congo’s independence from Belgium. Those years saw plenty of political strife, rebellion, and carnage. Political parties were expressly forbidden, but oddly, tribal and cultural associations were encouraged. Of course, these associations soon drifted into political parties, and by the mid-1950s, Independence was inevitable. Belgian pressure to eliminate these political alliances only heightened the desire to achieve independence. International pressures to end European colonial states in Africa, in combination with several violent riots led by Belgium King Baudouin to propose a Belgian guided Independence for the Congo. This occurred on June 30, 1960, thus peace reigned for a few short weeks.

Stephen Rookes spends the rest of the book covering the multiple rebellions from the Congo’s Independence in 1960 through 1964. The location and resources of the Congo made it an instant hit as the Cold War battles the United States, the USSR, and China all made the Congo a playground in the battle between communism and democracy. Even before the Congo’s independence from Belgium, South Kasai had already announced they were going to be a separate nation. Page 21 provides a nice photo of the unique Swedish armored truck, the Terrangbil m/42D that the Swedes utilized as part of the UN force of some 10,000 troops. Below that photo is a map of the Provinces in the Congo from their independence through 1963. A military coup d’etat was up next, followed by the Lumumba Rebellion. Not to be outdone, the Katanga province declared independence from the Congo. Page 36 depicts the Katanga Air Force inventory in Table 2 along with a photograph of one of the three Fouga Magisters that gave opposing forces a run for their money. Mercenaries were brought in to fight the Simba rebellion with photographs on pages 54 and 61. The sections include:

I found the rise and fall of Pierre Mulele quite memorable. Patrice Lumumba was the first prime minister of the Republic of the Congo and Pierre Mulele found himself as the Minister of Education in Lumumba’s cabinet. Patrice Lumumba was assassinated in 1961 and his followers, if not arrested or killed, scattered. Pierre Mulele fled to Egypt and then to the People’s Republic of China to train in guerrilla tactics. While in China, Pierre Mulele became a Maoist, and returned to the Congo to lead the Kwilu Rebellion. Using a mix of tribal traditional beliefs, combined with magic, Piere Mulele convinced his followers he was invincible and if his followers practiced his core (Maoist) principles, they would be invincible as well. One of the ‘magic’ tricks is disclosed in the chapter: Pierre Mulele would load a pistol with blanks and ‘shoot’ himself in front of his followers, unfortunately, his followers did not fare as well against .50-cal machine guns…

Stephen Rookes present an easy read that is well supplemented with photos, maps and tables. Although I had limited awareness of the political personalities, I had interest in Sweden’s role in the United Nation’s presence in the Congo. I was able to read this easily over three nights. The modeler is well served with good action photographs of armored vehicles and aircraft that is well supported with Luca Canoss’ and Tom Cooper’s color aircraft side profiles, David Bocquelet’s armor color side profiles, and Anderson Subtil’s uniforms. Volume 2, For God and the CIA was also released in December, 2020, so I will be looking for it next.

If you own one the previous releases in the Africa @ War series, you know what you are getting. If this is your initial entry into this series, you will be quite pleased.

My thanks to Helion & Company, Casemate Publishing, and IPMS/USA for the chance to review this great book.