The Final Archives of the Führerbunker 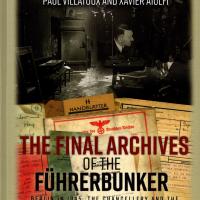 This book vividly describes life in Hitler’s Führerbunker below the German Reich’s Chancelleries as the Soviet Red Army closes in on Berlin at the end of WWII. Two French officers secretly entered the bunkers in November 1945 and gathered hundreds of documents that describe the living conditions and actions of the bunker’s inhabitants at the end of WWII. These documents form the basis for this book.

Führerbunker is divided into chapters that chronologically describe the last few months of Germany’s Reich at the end of WWII. Each chapter contains written text, sidebar narratives with first-person accounts, B&W and color photos with descriptive captions, photos of historical documents, and color illustrations. The chapters are:

The opening chapter describes the chaos and devastation following the bloody assault on Berlin by the Red Army.

This chapter describes the renovation of the old Chancellery between 1938 and 1939, and also describes the building of the new Chancellery from 1938 to 39. The building is described in historic black-and-white photographs and includes color photographs of artifacts and documents from the new Chancellery. Artwork and other artifacts are shown in color and black-and-white photographs. There are three significant sidebar articles, one describing Hitler’s daily life in October 1933, the new Chancellery as seen by Le Monde Illustré in 1939, and a description of desk drawer fittings from Hitler‘s office that were captured as mementos. The chapter provides a good description of the design and monumentality of the new chancellery along with its opulence and grandeur.

The first bunker, the Outer Bunker or Luftschutzbunker, was built in 1936 under a large reception hall. This bunker was later renamed the Vorbunker or Outer Bunker. A sidebar in this chapter describes Hitler in Berlin, living in the complex of the Reich chancellery. Hitler’s architect Spear recommended building a new shelter under the gardens of the chancellery which would become the Führerbunker. These bunkers are described in illustrations, photos, and a two-page isometric section.

The final set up of the spartan Führerbunker and the people who lived there is described by eyewitness accounts and photos. This bunker was the final home of Hitler and Eva Braun for the last few months of the war.

Waging War from the Führerbunker

Hitler’s physical and mental condition is described in this section with description of his activities and descriptions by those close to him. The defense of Berlin is described as the atmosphere in the bunkers became oppressive during the final confrontation.

As the Soviets encircled Berlin, Hitler became resigned to the end of the fight. This chapter includes an eyewitness description of life in the bunker and describes the treason and arrest of Goring.

Bunker of the Apocalypse

Reconnecting the Threads of History

This very brief chapter describes efforts by the Russian government to erase all traces of Hitler‘s death and made it impossible to know what really transpired. Historians later uncovered some hints about what had transpired, and the 2004 movie Downfall provided some tangible form to the facts.

A Visit to the Reich Chancellery

The secret visit and how he gathered up many historical documents in the Führerbunker by French Captaine Michel Leroy in November 1945 is described. This chapter includes many black-and-white photographs that illustrate the conditions in and around the Führerbunker after the end of the war. Several first-person accounts describe the ruins of the Führerbunker as witnessed by the first Allied visitors.

This chapter describes in detail many of the documents salvaged by Captain Leroy in November 1945. The documents include telegrams with Hitler‘s last orders to the military, telegrams related to Goring’s treason, and communications with other Reich officials outside the bunkers. Other documents relate to recommendations for award of metals, Martin Bormann’s archives, some drawings from Bormann’s daughter, and a booklet with pictures depicting life in Hitler’s HQ in Rastonburg. Numerous documents are reproduced in this section and give a vivid, personal connection to the German Reich during its last days.

Biographies of several key figures are included in this chapter including Martin Bormann, a description of Hitler’s personal security, Hitler’s personal attendant Otto Günsche, and the Reich’s administrator Hans Lammers.

This excellent book has photographs illustrating the destruction of Berlin that could inspire diorama builders but would be most interesting to history buffs and those interested in the last days of the German Reich and it’s Fuhrer.

Thanks to Casemate for publishing this book and providing a review sample to IPMS.

Visit to the Chancellery

The Documents
Previous Next