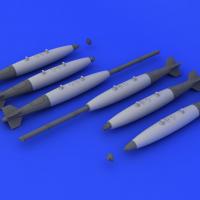 Sincere appreciation to Eduard for providing yet another review item, and to the IPMS USA reviewer corps leaders for sending it to me!

Decals round out the presentation, including yellow stripes for the bomb noses and two types of stencil, yellow and white.

Assembly requires careful sanding of the pour gates after you remove the parts, particularly if you don’t want “wonky” fins. You will have to ensure the fins are also correctly oriented to the mounting lugs on the forward bomb body, as this matters when used on a MER/TER situation. No fin interference!

Cool details: The access hatch for assembling the tail assembly to the forward bomb housing is there, with screw holes! And bomb carry lugs are integral to the bomb body… no fiddly gluing something an ant would have difficulty placing!

All in all, a great effort… Eduard’s Brassin range is ever-expanding, and with this being yet another complete model in a blister pack, with resin parts and decals, I give them 10 of 10 for subject and performance, well done Eduard!

With and Without Fuse Extenders