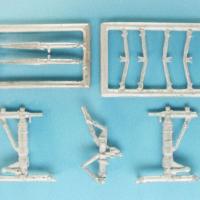 Scale Aircraft Conversions has released a set of white metal front and main gear for the Minicraft USAF KC-135E in 1/144th scale. This set includes a one part front gear strut and two 4 part main rear struts. These nine parts are direct replacements for kit parts # 12, 16, 17, 28, 29 and 36 times 4.

During my parts inspection I did discover that on the SAC main landing gear assemblies where the tires are mounted, two tire mounting pins are a rather short (see photo). Modelers of average experience should be able to overcome this deficiency by extending the mounting points with pins.

SAC landing gears are easily prepared using an X-acto, pin file and flex file. I assembled the main gear using Hobbytown medium superglue. I found the assembly sequence a little challenging as parts 36 were somewhat bent and had no real reference point for mounting. After cleaning and sanding my replacement gear, I mounted them to spur using super glue and primed them using Tamiya Fine Surface Primer for Plastic and Metal (white). Next they were sprayed Tamiya X-2 Gloss White and allowed to dry in the dehydrator for an hour then detail painted using Model Master Chrome Silver. Once fully dry (about 4 hours in the Dehydrator) they were airbrushed with Testors Clear Lacquer to facilitate weathering. Relief details were drawn out using AK enamel wash for interiors.

I feel the SAC gear are fair replacements for the kit gear and are somewhat easy to use. For my KC-135E build I choose to use the Minicraft gear primarily because I wish not to fix the SAC gear. Thanks to Ross MacMillan and Scale Aircraft Conversions for the chance to review the landing gear and to the support staff of the IPMS/USA reviewers corps.