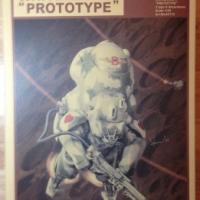 This Whitenight is from a Japanese manga where the “MK44 is a Heavy Armored Fighting Suit which humans using for the defense from an attack of the mad computers.” Hasegawa manufactures the MK44H-0 and several other suits from the Maschinen Krieger ZbV 3000 manga. I have only been modeling for a few years and I normally model modern jets, sci-fi spacecraft or real space. However; since I’m not a Star Wars vs. Star Trek, Picard over Kirk kind of guy, I decided to try something new.

Hasegawa’s MK44H-0 Whitenight Prototype is a 1/20 scale armored suit composed of over 180 pieces. The pieces are modeled on 12 sprues; mostly of blue-grey plastic. A vinyl tree of bushings allows the smooth articulation of the suit in various positions and stances. There is a ton of detail in this model, especially in the cockpit area. The cockpit area of the model is a slip and slide, push/slide contraption that allows the front of the model to be separate and the interior exposed. (Fit problems forced me to model the suit with the cockpit area sealed; details below.)

The model includes decals for four different squadrons. You don’t have to choose your paint scheme yet as the basic building technique will be the same for any squadron. Build in sub-sections, paint and then snap the sub-sections together to assemble a final model. Some parts should be omitted from the sub-sections (the knee caps, for example) and attached during final assembly. I wouldn’t say this is a complicated build, but there are a lot of plastic pieces to lose track of. Just follow the instructions and watch out for left and right.

The legs are constructed following steps 1 thru 10. When completed you have the feet, shin and thigh assemblies. I choose to omit parts F7 (x2), B12 and B13 to paint and attach later. Be careful to mind your left and right when building the thighs. You must construct a left thigh by drilling 2 holes into a D4 and a right thigh by drilling 2 holes into a D3. Remove any seem lines, prime the surfaces and repeat until satisfied with the sub-assemblies. Protect the ball-joints from paint and be sure to prime and parts omitted from construction.

With the basic construction of the hatch, body front and pilot’s seat completed, I painted the inner surfaces medium gray. I painted the seat brown with the sides of the headrest red. Behind the pilot’s seat is a tank with miscellaneous plumbing. I painted the tank green and the piping copper. I dry pushed A8 with silver, masked the grill work and painted it green. Part C16 was painted burnt umber. The pilot’s seat assembly was completed and I followed with a black oil wash. One could certainly add a few more colors in the cockpit by some of the different details. (Most of these details ended up to be hidden when I decided to sealed the cockpit.)

During the dry fit of the front and back halves of the body, I found a major fit problem between parts A1, A2 and M2. Part A2 flared too much at the top and when pinched to bring it in alignment with A1, bowed away from part M2. I decided to forgo being able to remove the body front. I permanently glued the body front and back together and commenced on filling/shaping the seam. After all the seam work was done I applied the rivets (parts B1) to the body. I did not attach the waste armor (D25 x2) or the shoulder armor (D25 x2).

Most of my surfaces were already primed while checking for and repairing seams. I gave everything 1 final primer coat and masked off a crude camouflage pattern. I separated the model back into its sub-assemblies for painting. And painted the model (except for the feet) gloss white; gloss will help when applying the decals. A light coat of clear gloss was applied in preparation for the decals. I had no problems with the decals. They released from the carrier and laid down easily. I did have to use Solvaset to settle the decals around the complex curve of the shoulder plates. I completed the model by applying a clear coat of satin varnish.

In retrospect I could have left the cockpit unsealed. However, I couldn’t think on how I would display the model in competition without building a mini diorama to hold the front and read body shells for display. By taking my time and “reading” the instructions (looking at them because they are in Japanese), I limited my interchanging a left and right side part only once. The overall fit is excellent, except where noted. The decals are excellent. It was a mostly enjoyable build.

Thanks to Hobbico and Hasegawa USA for the review kit.